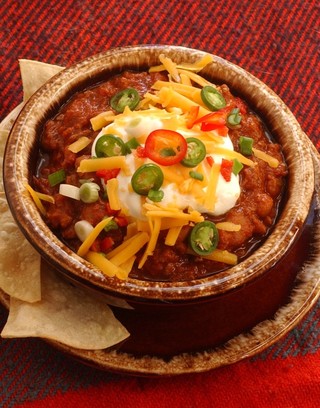 My Southern-style chili, gussied up just a little with sliced chilies, sour cream, and grated cheddar. Photography by the incomparable John Carrington

Last week Savannah had its first real taste of autumn weather with about three days of cool temperatures, low humidity, and clear skies. It was finally, magically, chili weather, an opportunity not to be missed: my first batch of the season was soon simmering away in my well-used Le Creuset enameled iron round oven.

A nice, spicy pot of chili is such a warming, comforting thing that one wouldn’t think it could be a source of controversy, but culinary gadflies seem to take their points of contention where they can find them. Chili Season usually opens with a lot of posturing about what constitutes “authentic” chili. No beans, no ground meat, no this, no that; or yes, beans, yes, ground meat, and lots of this-and-that, including those dolled-up “gourmet” versions with wine, olives, half a dozen herbs, turkey, and God knows what else.

All I can say to those gadflies is . . . get over yourself: while the thing we call chili in America is inarguably inspired by the cookery of our neighbors to the South, particularly the cuisines of Mexico, it is not “authentic” Latin or Mexican cookery—it’s American. It’s also less a specific thing than a culinary idea.

I’ve therefore come to the conclusion that what constitutes “authentic” for this quintessentially American dish changes from place to place, because what actually makes a chili “authentic” is whether it’s made as it was in our childhood—wherever that childhood happened to have been passed.

That means, my friends, that if you are from Texas, you are not allowed to turn up your nose at anyone outside of Texas who puts ground meat and beans in their chili. It also means that if you are from one of the places that do, you can’t call Texans snobs for not doing it.

And it means that as much as I would like to call you out for being silly, I am not going to quibble with you if you want to put wine, black olives, unsweetened chocolate, or ground turkey in your chili, just as long as you don’t call me out for the ketchup I put in mine.

By the way, one of the great things about most American chili is that it can be used as a hot dip for a casual cocktail or tailgate party. It may seem plebeian, but if you serve it forth in a big crock with scoop-type corn or tortilla chips, trust me, your company will put it away with gusto even as they walk away whispering “can you BELIEVE she/he served that?”

1. Heat the drippings or oil in a heavy-bottomed 7 quart Dutch oven (preferably enameled iron) over medium heat. Crumble enough beef into the pot to cover the bottom without crowding and brown it well, stirring and crumbling it further with a spatula. Remove it from the pot with a slotted spoon and add more beef, repeating until all the meat has been browned.

2. Add the onion and sauté, tossing and stirring often, until translucent and golden, about 5-8 minutes. Add the garlic and oregano, and return all the beef to the pot. Sprinkle the chili powder over it and toss until it is very fragrant. Add the tomatoes, broth, ketchup, and a large pinch of salt. Bring to a boil, lower the heat to a simmer, and at a bare simmer, stirring occasionally, until the liquid is reduced and the chili is quite thick, at least 1 hour.

3. Stir in the beans, return the chili to a simmer, and simmer until the beans have absorbed the flavor of the chili, about half an hour. Taste and adjust the seasonings and simmer 2-3 minutes longer.

Looks delicious and I am ready for my first chili for the season. (I'll start with the BEST, which your recipes always are.)

I prepared this recipe last night, using the version Damon handed out last Wednesday at Kitchenware Outfitters (the only difference in the hand-out version was tomato puree instead of crushed tomatoes). I suspected when trying it at KO that my wife would love it; she does. We both do. Great, simple recipe, sure to become a regular in our home. Thanks, Damon!