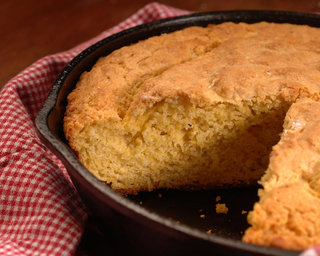 Cornbread the way God Meant it to be: made with no sugar and baked in a cast iron skillet.

Whoever figured out how to recycle stale bread by seasoning it with herbs and spices, moistening it with broth, and then shoving it into a roasting fowl so that it slowly baked, basting itself in the juices from the bird while it rotated on the spit, is one of those thousands of unsung culinary giants that has been lost to history. But that the idea survives to this day is a testament to its sheer genius, and it’s a shame that they never got due credit.

It’s an even bigger shame that whoever started to turn cornbread into cake by dosing it with sugar is not here to take the credit for that, because I’d like to string them up by their—er, thumbs. It’s probably the same charlatan who started to put sugar in biscuits. Look here: if you want to eat sweet bread, then put syrup or jam on it and leave the rest of us alone.

To my mind, there’s only one thing worse than sweetened cornbread, and that’s dressing that has been made with it. It’s culinary vandalism at its absolute worst. To bite into a crusty wedge of promising looking cornbread and find that it is sweeter than dessert is bad enough, but to bite into a dressing that has been made with the stuff is unforgivable. My first bite brings crashing disappointment; the second, weariness; by the third, I am downright mad.

So your stuffing has dried fruit in it? Fine: that means it already has a sweet element and DOES NOT need more. Leave the sugar bowl alone when you’re making the cornbread, especially if it’s going into the dressing.

There are people who get more worked up over whether this quintessential side for the turkey should be true stuffing and baked inside the bird, or just baked as dressing in a separate dish. Not me. I don’t care: do whatever your own traditions and tastes dictate. But for heaven’s sake, don’t ruin the dressing (and the bird it will accompany) by making it with sweetened bread.

Our fixation with sweet has gotten entirely out of hand. But moving on to what you should do.

In my family, the dressing/stuffing is always made with cornbread and stale biscuits. If you’ve never had it, why, you’ve simply missed out on one of America’s great gastronomical inventions. Cornbread lends a hearty texture and flavor that even the best “artisanal” wheat bread cannot match; the biscuits give it body. The only hitch is that you will have to make your own bread, and will need to make them a day or two ahead so that it will be stale by the time you get ready to make the dressing.

Here is how to make the cornbread well.

1. Position a rack in the upper third of the oven and preheat it to 450° F. When it has reached that temperature, lightly grease a 10-inch iron skillet and heat it in the oven for at least 10 minutes. Meanwhile, whisk together the meal, soda, and salt in a large mixing bowl. In a separate bowl, beat the egg until it is smooth and beat in the buttermilk and 2 tablespoons of the melted fat.

2. When the pan is well heated, make a well in the center of the meal and pour in the milk and egg. Using as few strokes as possible, quickly stir it together until there are no dry lumps.

3. Take the pan out of the oven and add to 1-2 tablespoons of fat. It should just cover the bottom and will sizzle if the pan is hot enough. (If it doesn’t, put the pan back into the oven for about 5 more minutes, or until the fat is sizzling hot but not smoking.) Immediately pour in the batter. It must sizzle when it touches the pan to achieve the fine crust of a well-made skillet bread.

4. Bake it in the upper third of the oven until golden brown and the center is springy, but firm, about 35 minutes. Immediately invert the pan over a plate. The bread should come right out of the pan. Serve the cornbread piping hot with plenty of good butter.

Perfect cornbread. My family has made it that way for generations. Note there is NO SUGAR!It is not supposed to be in cornbread.

No where in your directions does it say when or where to add the 1 teaspoon baking powder from ingredients??

It's added to the meal with the soda and other dry ingredients. Thanks for noticing.