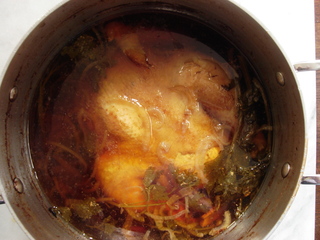 It doesn't look like much, but the contents of this pot make all the difference between a good Thanksgiving dinner and a great one.

Today, let’s talk about the foundation on which the entire Thanksgiving dinner will rest: broth.

The most neglected pot in far too many American kitchens is the stockpot. At Kitchenware Outfitters, the kitchenware store where I work and teach, we sell a respectable number of these pots, but inevitably the words “cooking pasta” or “spaghetti sauce” or “chili” or “stew” come up, accompanied by a lot of questions about other possible uses for this tall, relatively narrow pot.

Yes, you can boil spaghetti in it; you can even make a thick spaghetti meat sauce or stew in it if it has a thick bottom and you don’t mind doing a lot of stirring (tall and narrow is not the shape you want when it comes to stewing), but it’s really designed for making broth and stock—a job for which, I am pretty sure, it is rarely used.

A well-made homemade broth requires absolutely no skill, precious little effort, and makes all the difference between a good dish and a great one. It also perfumes the house with the most bewitching aroma, making everyone think exactly what you want them to think: that you have been knocking yourself out for days. Besides, canned broth always makes the gravy taste as if it came straight out of the can no matter what you do to it.

There’s nothing horrible about canned broth; the perfect food police are not going to come and slap you with a bad mom or dad citation for using it. But it’s produced in mass quantities, and as Chef Patrick Zimmerman pointed out in a recent class can never have the depth of flavor of even a homemade quick broth, and simply can’t offer the kind of underpinning support that you need for that special soup, stuffing, gravy, or braised vegetable.

This year, give your great cooking the support it deserves and rediscover the manifold benefits of a simmering stock pot. You can make the broth this weekend, which will give you plenty of time to strain and degrease it, so that it will be as easy to use as the canned stuff.

1. Put the turkey parts (and hen) in a heavy-bottomed 10-to-12-quart pot, pour the water over them, and warm it over very low heat until it is almost simmering and the scum begins rising to the top, about 45 minutes. As soon as scum begins to form, carefully skim it off, and continue to do so as more forms. Do not stir the broth, now or hereafter.
2. When the scum no longer forms, let it simmer for half an hour. Meanwhile, stick the whole onion with the cloves. Raise the heat to medium and add both onions, the carrot, celery, parsley, thyme, bay leaves, peppercorns, and ginger. Add about a tablespoon of salt and let it return to a simmer, again carefully skimming off the scum as it rises to the surface.
3. When it returns to a simmer, reduce the heat as low as you can get it and gently simmer, uncovered, for at least 3 hours, checking periodically to make sure it never boils, but simmers very slowly, the steam bubbles not quite breaking the surface. You want to lose about a quart of the liquid—but no more than that, so if the liquid evaporates too much, bring a teakettle of water to a simmer and replenish as needed. Longer won’t hurt it. The stock pot in a commercial kitchen is kept going for days. Turn off the heat and let it cool.
4. Carefully strain the broth into lidded stainless steel, enameled metal, ceramic, or glass containers, discarding the solids. Let it cool uncovered, then cover tightly and refrigerate. When the fat solidifies on top, remove it. It will keep for at least 5 days. To store it longer, chill it, skim off the fat, spoon it into freezable containers, seal, and freeze. It will keep for at least 3 months.

Great recipe! Thanks for sharing!

Thank you, Angela! Next post will be about the cornbread and dressing.

This sounds delicious! Getting ready to put on my pot right now. I've never included cloves or ginger, but will try it today. Thank you!