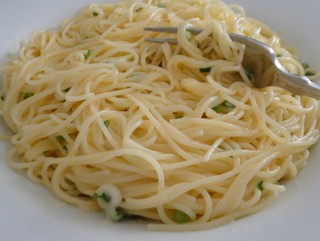 Sometimes the very best cooking is barely cooking at all. That’s partly because the most important skill in any cook’s repertory is that of knowing when to stop.

For example, one of the best of all possible ways to sauce pasta, whether it is fresh egg noodles made at home or dried factory pasta, involves no cooking at all: it is simply tossed with just butter and freshly grated Parmigiano. I grew up in the South, fully ignorant that this was a classic way of finishing pasta in Northern Italy, but it was one of the first pasta sauces from my childhood and has remained a lifelong favorite.

To toy with it, even a little, is to risk upsetting one of the most perfect balances in all cooking—not to mention the powerful tug of childhood nostalgia.

And yet, as I took out the ingredients for it at lunchtime, I came across a small bundle of beautiful, slender young scallions in my refrigerator. They were on the edge of losing their freshness, and to waste them seemed unconscionable, even for the sake of a craving for that simple taste of my childhood. They were quickly washed, trimmed, and thinly sliced while the pasta water came to a boil.

After tossing them with the hot pasta, a generous handful of grated cheese, and an equally generous amount of first quality fresh butter, I coiled the first mouthful onto a fork and raised it to my lips, half expecting to be disappointed for fiddling with perfection.

The bright, herbal flavor of the still-crisp scallion, enrobed in silken butter and mellowed by Parmigiano, had added a welcome hint of freshness, upsetting nothing. It was like the first suggestion of spring on the breeze of a blustery late-winter afternoon.

It was also quickly gone.

Maybe it was nothing more than the spice of hunger that made it work; certainly it was not due to any great burst of culinary brilliance on my part. However, I do think a part of its success was because the added ingredient was treated in a way that was both natural to it and faithful to the simplicity of the original sauce.

But don’t take my word for it; the next time a handful of slim, snapping-fresh scallions or green onions come your way, try it and decide for yourself.

Thin Spaghetti with Butter and Scallions
Serves 4 to 6

Bring 4 quarts of water to a rolling boil in a large, heavy-bottomed pot. Wash, thoroughly drain, and trim the scallions, removing any discolored leaves. Pat them dry and thinly slice them. You’ll have about ¼ cup—more or less. Don’t worry over it.

When the water is boiling, throw in a handful of salt and stir in the pasta, separating the strands as they soften. Cook until they are al dente, firm to the bite, but without a trace of pasty rawness in the middle.

Have ready a warm serving bowl. Quickly drain the pasta, taking care not to over-drain it, and immediately pour it into the warm bowl. Add the scallions and half the cheese and rapidly toss until the cheese is melted and forming a creamy coating on the pasta.

Serve the pasta immediately, passing more cheese on the side.

Man, this made me hungry.

Yummy! Tell me what your favorite "best-quality fresh butter" is, please!