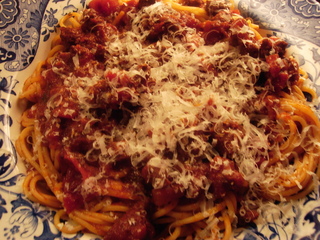 If you are of a certain age, you remember it simmering for hours on the back of the stove, thick with tomatoes, redolent of garlic, oregano, and sometimes an adventurous splash of wine, filling the house with its rich aroma. It came to the table ladled thickly over a bed of fat, slightly overcooked spaghetti, dusted generously with grated cheese that came straight from a green can.

We just called “spaghetti,” but it of course wasn’t the bed of noodles underneath that really defined this iconic American dish; it was the rich blanket of slow-simmered meat sauce on top. While most likely evolved from the ragùs of Sicilian and Neapolitan immigrants from that latter part of the nineteenth century, that rich, meaty sauce was, by mid-twentieth century, no longer Italian by any stretch of the imagination. It had been adopted, adapted, and remade into something wholly American.

In many ways, it became a defining dish for a whole generation of American cooks—representing a time when most middleclass Americans knew little of authentic Italian cooking, a time before “pesto” became a national culinary buzzword, when most of us had never seen spaghetti with a sauce that wasn’t red.

But then the country began to rediscover Italian cookery. “Spaghetti” became “pasta” and our naïve spaghetti with meat sauce got shunned because it wasn’t “authentic.” But it was—it was authentically American, arguably, America’s melting pot at its very best. And what’s more, it was good, and we do well to reclaim and celebrate it as our own.

Nostalgic though its old accompaniments may be, it deserves better: offer freshly grated Parmigiano-Reggiano instead of that sad green can, toasty bruschetta rubbed with real garlic and drizzled with olive oil, and a mixed romaine salad lightly dressed with good olive oil and vinegar.
Serves 8 to 10

1. Put 2 tablespoons of oil in a large, heavy-bottomed pot or Dutch oven over medium heat. Brown the beef in batches, removing it with slotted spoon. Add the onion and sauté, tossing, until softened and translucent, but not colored. Add the garlic and oregano and sauté until fragrant, about half a minute. Return the meat to pan, stir well, and heat through.

2. Add the wine and bring it to a boil, stirring and scraping bottom of pot, then add the tomatoes and tomato paste, stirring until smooth. Put in bay leaves and season with salt to taste. Bring it to a simmer, loosely cover, and reduce the heat to medium low. Simmer gently until the sauce is thick, the beef meltingly tender, and the flavors well blended, at least 2 hours, longer won’t hurt.

3. Bring 6 quarts of water to a boil over medium high heat. Add a handful of salt, stir, and then add the spaghetti, stirring to separate the strands. Cook, stirring occasionally, until al dente. Drain it in a perforated (not wire mesh) colander and pour it into a warmed bowl. Toss with half the sauce until evenly coated. Top with remaining sauce, sprinkle lightly with grated cheese and serve, passing the remaining cheese separately.

Preparing tomatoes for sauce: If you’re using canned tomatoes, choose whole plum tomatoes (preferably San Marzano) and seed and chop them yourself. They break down better in the cooking and make for a much better texture. Seed them over a strainer set over a bowl, and use all the juices. When I do use canned tomatoes, I always add a spoonful of raw (turbinado) sugar to counteract the sharpness of the citric acid that’s added to them as a preservative. When pressed for time, I use crushed plum tomatoes and some cooks even prefer them. Since they contain tomato paste, if you use them, omit the paste called for. In season, I use fresh tomatoes: the flavor is incomparable. To prepare them, put them in a heatproof bowl, pour on boiling water to cover, and let stand 1 minute. Drain, slip off peelings, seed them over a sieve set in a bowl to catch the juices, and then chop and put them with their collected juices. Use a little tomato paste with them to give it body.

It's probably a sin against mother nature, but I used to enjoy a bottle of dark Spanish wine with this.