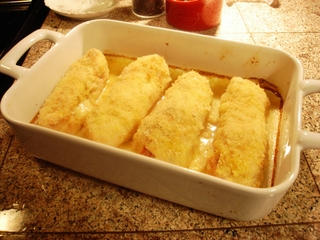 Ilda's "Petti di Pollo al Forno" has been a staple in my own kitchen for more than thirty years
It was 1978 and I was in Genoa, Italy, allegedly to study architecture. The truth, however, was that I spent far more time in the kitchen with Ilda, the Genovese woman who was our cook, than I did in studio—a fact that ought to have told me something, but that’s another story.

That kitchen was an idyllic setting—and that's not merely the golden gloss of memory talking: it was a large, airy room with gleaming white tiles, polished terrazzo floors, wide, marble-topped work tables, and an enormous pair of sinks hewn from a single piece of gray marble. We used old wine corks to plug the drain. On one end, wide windows overlooked the Bay of Genoa, and at the other was a pantry hewn out of the hillside; it was like a natural refrigerator.

But the best thing about it had nothing to do with its view or appointments: the best thing was Ilda. She was not a culinary genius; she was just a simple Genovese housewife who had no formal training; but what she did have was years of experience, keen instincts, and, perhaps most important of all, a generous heart. I learned more from her than any of my professors that year.

One of the first things she taught me was this simple baked stuffed chicken breast. It begins like a classic cordon bleu—boned chicken breasts are stuffed with good ham and cheese and then rolled in breading. But then it takes a couple of important turns. Instead of sautéing or frying them, Ilda put them into a buttered casserole, poured a little dry white wine or vermouth around them, and baked them. The flavors are simple but deeply satisfying, and it has been a staple in my own kitchen for more than thirty years.

In all that time, the recipe has adapted to my own kitchen habits, and I’ve made one deviation from Ilda’s method: the Italian chicken breasts that she used were sensibly small. She slit a horizontal pocket into each one, wrapped the prosciutto around the cheese, and stuffed it into the slit. The chicken breasts we mostly get nowadays are far too large to make a single serving—especially as I’ve aged and lost that ravenous hunger of youth. Now, I cut each breasts in half horizontally, forming two equal cutlets, and roll them around the ham and cheese rather than stuffing it into a pocket.

Position a rack in the upper third of the oven and preheat to 350º F. Lightly butter an 8 by 10 ceramic or porcelain casserole. Remove the “tenderloins” from the chicken breasts and set them aside for another use. Lay the chicken breasts flat on a cutting board and, using a very sharp knife, cut them horizontally into halves. Spread plastic wrap over a sturdy flat work surface lay the chicken cutlets over it, and cover them with a second sheet of wrap. Lightly beat them out until they are a uniform thickness.

Turn the top (skin side) cutlets skin-side-down. Sprinkle them all lightly with salt and pepper and lay a slice of prosciutto over each, completely covering it. Lay a slice of cheese in the center and then roll the cutlet around it, gently pressing it together. Lightly season the crumbs with salt and several twists of the mill. Roll the stuffed cutlets in the egg, allowing the excess to flow back into the bowl, then roll it in the seasoned crumbs, patting gently so that the crumbs adhere. Lay each cutlet in the prepared casserole as it is breaded. Repeat with the remaining cutlets.

Carefully pour enough vermouth around the cutlets to come halfway up their sides. Dot them with butter and bake in the upper third of the oven until they are golden, just cooked through, and the cheese is melted, about half an hour.
2 Comments

You can make anything sound delicious, Damon. Not only do I want to try the recipe, I want to be in that kitchen!

Thank you, Caroline! That kitchen was a very special place indeed. I can close my eyes and still call up the aromas--and the way the air felt.