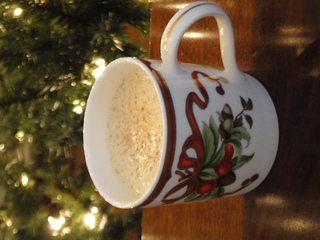 Real eggnog, served up with its crown of froth and nutmeg in a festive holiday Tom-and-Jerry Cup, is something to celebrate all by itself.

One of the most enduring symbols of the American holiday table is eggnog, that lusciously creamy, frothy, deeply intoxicating concoction of eggs, milk, and some kind of alcoholic beverage. Like fruitcake, the season’s other great culinary symbol, this heady beverage is reviled almost as much as it is revered.

There may be something in the old saying about familiarity breeding contempt; part of the blame can be laid on the thousands of gallons of commercial eggnog that flood our dairy cases every December. But the commercial stuff is not really eggnog; it’s a confused version of another old holiday treat, drinking custard, a thin but rich Crème Anglaise. Drinking custard also has a long association with Christmas (it was actually the tradition in my own tee-totaling Baptist family), and in many places can be found right next to the eggnog in the dairy case. But while it has a lot to recommend it, the only things it has in common with a proper eggnog are eggs and milk.

First of all, while drinking custard can be spiked, it’s not really an alcoholic beverage, whereas a proper eggnog is by definition. Moreover, a proper eggnog is never cooked: the alcohol takes care of that. And it must have that luscious frothy texture from whipped eggs.

There are thousands of variations, but the core recipe has not really changed in the last two hundred years. Fresh egg yolks are whipped with a little sugar and brandy, whiskey, or rum (or all three—some early recipes even included a fortified wine such as sherry or Madeira). It’s then cut with rich, whole milk and/or cream, and finally the egg whites are whipped and folded in just before serving. Sometimes the cream is whipped and folded in with the egg whites or dolloped on top. Regardless of the variations within, it’s finished with a fresh grating of nutmeg.

The history of this drink and its name have been tossed around by people who like to think of themselves as historians, but who are actually more interested in being clever and entertaining than accurate. Look here: Wikipedia is not a historical resource, and being facile is not the same as being factual. You can trust these people’s pat explanations about as much as you can trust a politician when he says he has an easy answer for all the country’s problems.

Here’s what we know: milk punches made with wine, brandy, or rum and often enriched with egg, are very old, and long predate the European colonization of our continent. This particular version was popularized in America by the beginning of the Federal period, and has been associated with Christmas at least since the early nineteenth century. Its name, variously attributed to several English sources, is probably American—note the “probably.”

An interesting footnote that is always ignored by these so-called “historians” is that eggnog was once considered medicinal, and often turned up in American household notebooks and cookbooks in the section for invalid cookery. Mrs. Hill (Mrs. Hill’s New Cook Book, 1867) noted that it was “excellent for persons suffering from bad colds and coughs.” Well, one way or the other, you certainly wouldn’t feel sick for long—and if you do, you won’t care.

For my part, I’ll leave speculations on the origins of the name to etymologists and to other people who like speculating about such things. Have at it; I’ll be over by the fire with a Tom-and-Jerry mug full of eggnog, simply enjoying it.

One essayist opined that in the South eggnog was now made with bourbon, and it often is, but it is by no means universal enough to make a blanket statement like that. I know just as many Southern cooks who make it with rum or brandy, and here in Savannah, many use all three.

1. Separate the eggs into glass or stainless steel mixing bowls; cover and refrigerate the whites. Beat the sugar into the yolks until they are light, lemon colored, and ribbon when dropped from the spoon. Beat in the liquor, cover, and refrigerate for at least 4 and up to 8 hours.

2. Just before serving, beat the yolk base until it is smooth again. Pour it into a punch bowl and stir in the milk and cream. Some hold back the cream and whip it, making the mixture very thick and frothy—almost too thick to drink. It’s worth trying at least once.

3. Whip the egg whites until they form very soft peaks. If you are whipping the cream, do it in a separate chilled bowl and only whip it until it is barely holding a peak. Carefully, but thoroughly fold the egg whites into the base, and then the whipped cream. Dust the top of the eggnog with the grated nutmeg and serve it promptly with a nutmeg grater close at hand for garnishing individual servings.

Uhm . . . Jack Daniels is not bourbon: It's a Tennessee sour mash whiskey. French brandy, a mid-range bourbon (i.e.: KENTUCKY whiskey from BOURBON County), or rum (or a little of all three) would be fine.

Bourbon is best, but that's just me. I am planning on making it lower carb by replacing sugar with stevia. By such clever substitutions I can drink 2x as much.

Sounds as if I'd better have some taxicabs lined up out here on New Year's Eve!