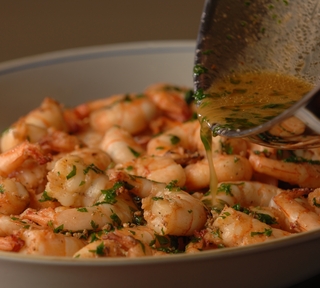 Elizabeth Malone Smart's Sherried Shrimp, from the Savannah Cookbook, photographed in the Battersby-Hartridge House by John Carrington.
While researching material for The Savannah Cookbook, one hot, rainy late-June afternoon (the kind that makes Savannah’s pavements steam and its air take on the heavy, sticky quality that has earned summers here the nickname “hot mayonnaise season”), I found myself in the wide, double-drawing room of the handsome Greek Revival Battersby-Hartridge House. While the outdoors was steamy and damp, the room, with its generous windows, lofty ceilings, and many tall mirrors, was airy and cool.

In fact, the world outside seemed dim and distant as I sat in its cooling shadows on a brocaded settee beside Connie Hartridge, surrounded by portraits and furnishings that had been in her family for at least four generations. It was almost as if the past had overtaken us and pulled us backward into it.

Part of that feeling was no doubt because of the stacks of old books scattered across the coffee table, their covers frayed and stained, their pages browned and crumbling with age, their bindings loose and often missing. Unlike the polished family silver and old mahogany furniture, they’d been taken for granted and neglected – used, and used hard.

And yet, those books were treasures equal to the most carefully tended antique in the room. They were the family manuscript cookbooks, whose faded, tattered pages preserve a part of Savannah that has almost been forgotten: a cuisine that could only happen when Old World elegance collides with marshes and wilting humidity. It was a cuisine that had, unlike the park-like squares and architecture of this old city, been nearly lost to the march of progress and the whim of fashion.

Connie held out a drab little cloth-bound notebook with both hands, “This was my grandmother’s.”

I took hold of it carefully and gently opened it on my lap. Its yellowed pages were covered with faded old-fashioned handwriting, a handwriting that spoke of another era, a time when penmanship was important and hearts were not considered proper punctuation.

The recipes were old-fashioned and simple, and yet they could in no way be called naïve or simplistic, for behind their directness was a palpable respect for subtlety and balance, a rare understanding of flavor that is largely lost on us today.

“Oh, my, listen to this” we’d exclaim to one another, taking turns reading them aloud, until we came to a recipe that stopped us both short.

It was exquisitely simple, just a handful of ingredients, yet so vivid and evocative that we could almost taste it: large fat creek shrimp, tossed in copious quantities of butter and a whisper of garlic until they were just curled and pink, then finished with sherry and a handful of freshly chopped parsley.

Her eyes got the far-away, hungry look of a young girl, and I knew she was back in another time, sitting at a table laid with crisp linen and glistening silver, her neck chafing from the starched collar of a Sunday frock and her feet, normally bare and sand-crusted, scrubbed and imprisoned in stockings and patent leather.

As the ice settled in our glasses, we sighed and turned the page.

From the household notebook of Elizabeth Malone Smart, a little old Savannah magic.

Put the garlic and butter in a large sauté pan over medium heat and cook until the garlic is golden, about 2 minutes. Remove and discard the garlic. Add the shrimp and sauté, tossing frequently, until curled and pink, about 3 minutes. Season well with salt and cayenne, both to taste (Savannah’s inlet brown shrimp often don’t need added salt), and remove them with a slotted spoon to a warm platter.

Add the sherry and bring it to a boil, stirring and scraping the pan, and let it boil half a minute. Stir in the parsley and pour it over the shrimp. Serve at once, over rice or with plenty of crusty bread to sop up the sauce.
1 Comments

I've seen this in your book, Damon, and long to try it. With a husband who can't have alcohol, I won't be able to -- MAYBE one of these days you can fix it for me down Savannah way! One hopes...