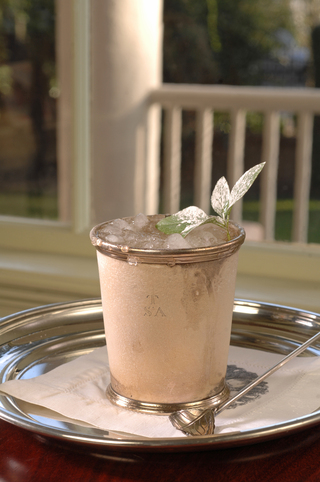 With Derby Day upon us, it seems appropriate to revisit one of the South’s most venerable and, in some ways, notorious drinks—the Mint Julep.

It is popularly supposed to have originated in Kentucky, where true bourbon is made, and perhaps the classic version was—Lord knows, it ought to have been, since tomorrow at Derby time mint juleps will be flowing across Kentucky like rainwater after a spring thunderstorm.

However, both the name “julep” and the idea are very old, having Medieval French origins in a drink of sweetened water flavored with the fragrant oils of herbs and flowers. That said, the modern mint julep of sweetened whiskey, mint, and shaved ice is no spring chicken itself, dating back as it does almost two centuries to the mid-eighteen hundreds. The early recipes contained no ice and were not necessarily flavored with mint. Mrs. Bryan’s formula, in The Kentucky Housewife (1839), which may be the oldest one in print, wasn’t even called a julep, but was merely a footnote to a recipe for rum toddy (sweetened rum cut with chilled water and flavored with nutmeg).

Recipes have evolved over the years, and many Southerners today use a pre-made simple syrup. Some even go so far as to boil the mint in this syrup, or even steep it in the refrigerator for a couple of days. No, thank you: there I draw the line. Yes, it is convenient for serving a crowd, but it also makes the julep taste like mouthwash, and kills the delicate flavor of freshly picked mint—which is, after all, the whole point.

This is my own favorite julep recipe. The name is a reference to St. Paul’s famous poem to charity in his first epistle to the Corinthians, chapter 13, and refers to a julep make with 3 jiggers of whiskey (one each for faith, hope, and charity). It comes from Virginia Hudson’s childhood essays Oh Ye Jigs and Juleps, written around 1900, and was coined by young Virginia’s adult friend Mrs. Ada Harris, who, apparently, was never at a loss for words.

Be careful of how many of these you have, or you’ll be at a loss for more than words.

1. Strip the leaves from 1 sprig of mint and drop them into the bottom of a julep cup or tumbler with the sugar. Muddle the mint and sugar until the mint is crushed. Add just enough bourbon to melt the sugar and muddle to combine.

3. Pack in the ice to the rim, insert a straw, and stir with the straw, again, never touching the sides of the cup, until the entire outside is frosty. Garnish with the reserved mint, pull out the straw (it isn’t properly used for drinking), and serve at once.

just perfect in every way

Excellent, Damon! Thanks for sharing.