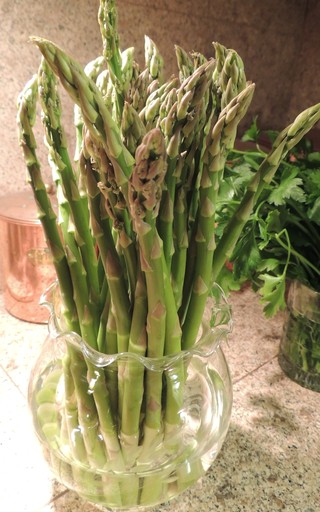 Newly gathered asparagus, kept fresh for the table in a vase of water.

A glance through cookbooks of the eighteenth and nineteenth centuries might give the casual reader the impression that our ancestors played a one note theme when it came to asparagus.

Most provided only a single recipe: within a few minutes of being cut from the garden (and the more careful authors even took the trouble to specify that it not be harvested until just before it was cooked), the spears were “scraped nicely,” trimmed into uniform lengths, tied into neat bundles, and boiled in salted water until just tender. Though the cooking times in these recipes often seem disastrously long to us, remember that, for one thing, asparagus tied into bundles would take longer to cook than loose spears, and for another, it was rare that cooks of those days were afforded the extravagant luxury of a clock in the kitchen. The caution for the cook to watch the pot and take it up before it lost its color and texture gives away that they intended the cook to watch the pot, not a minute hand.

The asparagus was then served on a bed of toast points that had been moistened in the asparagus cooking liquid and napped with melted butter the consistency of rich, thick cream. It was served with more melted butter, and the only disagreement from author to author was whether or not to drizzle some of the butter directly on the vegetable before it went to table. Most authors included a recipe for asparagus soup, and a few added a footnote noting the vegetable could also be served with vinaigrette. But that is about as far as they went.

Compare that to modern cookbooks and food magazines, where asparagus recipes can be found by the hundreds, and that slim variety might seem narrow and naïve. Well, yes, there’s some naïveté all right, but it’s not our ancestors.’ The reason there wasn’t much variety in those old books was simply because the season was so brief—just a few precious weeks when the beds in the kitchen garden (or neighboring farmer’s field) were producing. Fresh-cut asparagus was a very precious commodity.

Nothing has changed in the last century: the local growing season is still just a few precious weeks. Unfortunately, we, with our naïve faith in technology, smugly believe that because we can abnormally extend produce's shelf-life by refrigeration and ship it in from all over the globe, we’ve conquered the seasons, and can now have “fresh” asparagus year round.

Sorry, but no, we can’t: just because that asparagus has not yet been cooked or preserved in a can or freezer box does not mean it is “fresh.” And, in fact, it isn’t—not by any stretch of the imagination. We are lucky if we get it no more than ten days from the field. Needless to say, it will have but a ghost of the full flavor it had when it was just been harvested.

This is probably why we bend over backward to come up with as many different ways to bring it to the table as we can glean from the internet and our over-active imaginations. But if we had this lovely bite of spring only in its proper season, just minutes away from its bed, it’s not likely that we’d mess around with it, either.

That is not to suggest that their world was any more perfect than ours. Occasionally, an author did address what to do with asparagus that was not at its best. One such dish that was quite popular was a variation on a French recipe for dressing peas that frequently appeared in English cookbooks as “à la Française,” or “in the French manner.”

This is a convenient way of dressing asparagus, when it is too small and green to make a good appearance plainly boiled. Cut the points so far only as they are perfectly tender, in bits of equal size, not more than the third of an inch in length; wash them very clean, and throw them into plenty of boiling water, with the usual quantity of salt and a few grains of carbonate of soda. When they are tolerably tender, which will be in from ten to twelve minutes, drain them well, and spread them on a clean cloth; fold it over them, wipe them gently, and when they are quite dry put them into a clean stewpan with a good slice of butter, which should be just dissolved before the asparagus is added; stew them in this over a brisk fire, shaking them often, for eight or ten minutes; dredge in about a small teaspoonful of flour, and add half that quantity of white sugar; then pour in boiling water to nearly cover the asparagus, and boil it rapidly until but little liquid remains; stir in the beaten yolks of two eggs, heap the asparagus high in a dish, and serve it very hot. The sauce should adhere entirely to the vegetable as in green peas à la Française.

“Entremet” of course is French for “in between” and in Miss Acton’s day described a dish that was served between courses or as an accompaniment for a main meat dish.

1. Trim the asparagus and cut off the tough part of the stem. Drop it into a basin of cold water for a few minutes to refresh it. Bring at least 1 inch of water to a boil in wide, deep skillet or sauté pan set over medium high heat. Add a small handful of salt. Drain the asparagus and carefully add it to the pan, putting the stem end into the pan nearest you and letting it fall away from you into the pan. Cook 1 minute, immediately drain, and rinse it well under cold running water. Cut it into small, even pieces about the size of large green peas.

2. Wipe out the pan and put in the butter. Let it melt over medium heat and add the cut asparagus. Add about enough water to half cover the asparagus and bring it to a simmer over medium heat. Cook, gently shaking the pan from time to time, until the asparagus is just tender and the water is considerably reduced. Beat together the egg yolks and cream and slowly stir them into the pan. Heat until it the sauce is lightly thickened and just coating the asparagus. Turn into a serving bowl, sprinkle it with parsley, and serve immediately, or put the vol-au-vent onto small plates, spoon the asparagus into them, sprinkle with parsley, and serve as a first course.