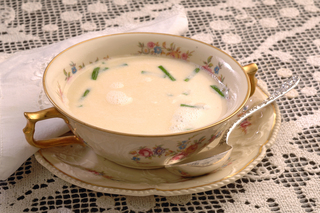 Pondering green-sprouting spring onions last week sparked memories of a nearly lost pleasure of the Southern gardens of my childhood: tender, spring shallot sprouts. They’re a luxury born of necessity: sprouting shallot beds have to be culled so that they don’t crowd one another, giving the bulbs room to grow fat and multiply. Since they’re too beautiful to just toss away, they’ve long been used as other green onions might be.

While some clever Vidalia farmers have figured out how to turn onion culls into cash by marketing them as “Green Vidalia Sweet Onions,” no one appears to have tried it with shallots. Green shallot sprouts are therefore never found in public markets; only the few lucky cooks with gardening friends can get them.

But when they can be had, spring shallots bring the very essence of the season to the table. More commonly used as scallions would be, in salads or as a finishing garnish, they can also be cooked on their own. That earlier recipe for Spring Onions in Cream is one excellent way, but nothing quite brings out their delicacy like Shallot Soup, a simple yet luxurious mélange of rich bouillon, shallot greens, and cream.

The recipe is from the family manuscripts of Emma Morel Adler, whose roots run deep in Savannah. Mrs. Adler was one of the early leaders of the city’s now legendary preservation movement, but fewer people know that she is also an accomplished cook, and equally as passionate about culinary preservation. When she first described this lovely soup to me, her eyes shone with the wistful, bright hunger of a young girl.

Now, to make it well, you must start with a really good

As Mrs. Adler makes it. You can substitute other things for the shallots, but there is no substitute for good bouillon. This rich, clear broth can be served all on its own, either hot, with a splash of Madeira, a slice of lemon, and sprinkling of thin sliced green onion or chives, or splashed with Madeira, chilled until jellied, and served in crystal bowls with lemon wedges on the side.

1. Rinse the chicken well inside and out and cut it up as for frying. Put it in a large stockpot with the beef shank, ham, and 4 quarts water. Add about 1 tablespoon salt and the peppercorns and bring it slowly to a simmer over medium low heat. Simmer gently, the bubbles never quite breaking the surface, for 3-to-5 hours—the longer, the better.

2. Warm the bacon drippings in a skillet over medium heat, put in the onion, and sauté gently until golden brown. Add the onion, carrot, parsnip, celery, parsley, and cloves to the bouillon and simmer an hour longer. Turn off the heat and let it cool. Strain the broth into a large bowl, let it cool completely, and refrigerate overnight, or until the fat is congealed on top and the bouillon is jellied.

3. Remove and discard the layer of fat on top. Ladle the jelly out of the bowl into a pot, being careful not to take up any of the dregs that will have settled at the bottom. Heat until it is just melted. Beat the whites of two eggs lightly and then add their crushed shells. Stir this into the bouillon and bring it to a boil over medium heat. Let it boil half a minute and remove it from the heat. Carefully skim off the scum and egg white.

4. Ladle the broth through a jelly bag or a wire mesh sieve lined with a piece of clean muslin. Let it drip through.

5. Serve bouillon hot in bouillon cups, adding a spoonful of Madeira to each serving. Float a slice of lemon on top and sprinkle with chives. Or, stir ¼ cup Madeira into the bouillon, chill until jellied, and serve cold, with wedges of lemon passed separately.

Now you are ready to make the

1. Bring 2 cups water to a boil in a small saucepan over medium heat. Put in the shallot tops, bring it back to a simmer, and drain off the water.

2. Add the bouillon, bring it back to a simmer, and simmer until the shallot greens are tender, about 4 minutes more. Add the cream, taste and adjust the salt, and let it just heat through. Serve at once in bouillon cups.