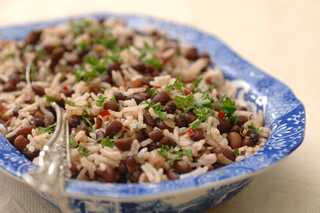 Hoppin' John with red peas, from The Savannah Cookbook. Photographed by John Carrington

For most Southerners, beginning a new year without dried field peas on the table would be unimaginable. Though stewed black-eyed peas are the most commonplace, the type and mode of cooking them varies from place to place across the region.

Of them all, perhaps the loveliest and most distinctive is Hoppin’ John, the classic pea and rice dish of the Carolina and Georgia Lowcountry. It may also be one of the least understood dishes in all of Southern cooking. Hoppin’ John isn’t cooked peas and rice mixed together: it’s a pilau, which means the peas and rice are cooked together using a specific technique. To understand that technique, we need only look to Sarah Rutledge’s venerable chronicle of early Carolina cookery, The Carolina Housewife, 1847:

One pound of bacon, one pint of red peas, one pint of rice. First put on the peas, and when half boiled, add the bacon. When the peas are well boiled, throw in the rice, which must first be washed and gravelled. When the rice has been boiling half an hour, take the pot off the fire and put it on coals to steam, as in boiling rice alone. Put a quart of water on the peas at first, and if it boils away too much, add a little more hot water. Season with salt and pepper, and, if liked a sprig of green mint. In serving up, put the rice and peas first in the dish, and the bacon on the top.”

Perhaps the oldest printed recipe for this iconic dish, it plainly describes the classic West African pilau technique, leaving no doubt that Hoppin’ John originated in the rice based cuisines of West Africa. The addition of salt pork, an ingredient foreign to the largely Muslim kitchens of that part of Africa, tells us how thoroughly it had been adapted into Lowcountry cookery by the beginning of the nineteenth century.

Like most of the regional recipes in this lovely book, it’s little more than an outline; that lone sprig of mint is the only suggestion of the heady seasonings that would have been commonplace in its original form. It doesn’t mean that the Hoppin’ Johns of those days were not highly seasoned, but the fact that Miss Rutledge gives the mint as an option does suggest that the variety of seasonings may have been on the wane.

A few notes on Miss Rutledge’s ingredients are in order for modern cooks. Red peas are tiny field peas that look like miniature kidney beans; they’re often hard to find outside coastal Carolina and Georgia, which may be why black-eyed peas often replace them in modern Hoppin’ John recipes—even within the Lowcountry. Bacon back then was not the breakfast meat we take for granted now but salt-pickled pork. It was not smoked and could be made with almost any cut from the pig. Though most modern recipes call for breakfast bacon, salt pork is closer to the original intent, as would be pancetta, the un-smoked bacon of Italy. To wash rice (essential for distinct, separate grains), put the raw grains in a bowl of water and gently rub them together until the water is milky. Drain through a wire mesh sieve and repeat until the water is almost clear.

Here’s how Lowcountry cooks make this classic pilau today. Since large pieces of salt pork are not as easy to come by as they were in the past, it’s more usual to use diced bacon or salt pork. When cut small, the meat releases more flavor into the broth, so we typically use about half of Miss Rutledge’s amount.

Oh, and as for the name “Hoppin’ John,” its origin remains obscure and is the subject of lively debate among historians and folklore-bound Southerners, but it is most likely a corruption of a Gullah name with West African or West Indian patois origins. But don’t worry about that; just make it and enjoy it.

1. Wash and drain the peas. Put them in a large pot with about 6 cups water and bring them to a boil over a medium heat. Do not add salt. Carefully skim off the scum, reduce the heat to a slow simmer, cover, and simmer half an hour.

2. Meanwhile, put the salt pork or bacon in a sauté pan or skillet over medium heat. Fry until it is browned and its fat is rendered. Add the onion and sauté until golden, about 5 to 7 minutes. Add the garlic and hot pepper and sauté until fragrant. Turn off the heat and add the contents of the skillet to the peas. Put in the bay leaf and mint sprig and season liberally with pepper, cover loosely, and simmer until the peas are tender.

3. Taste the broth and correct for salt, keeping in mind that it must be highly seasoned since a lot of it will be absorbed by the rice. Drain off but reserve the broth and measure 4 cups back into the pot. Bring it to a boil over medium heat, stir in the rice, and let it come back to a boil. Reduce the heat, cover, and simmer 14 minutes, until the liquid is absorbed and distinct steam holes appear. Cover tightly, turn off the heat, and let it steam 12 minutes, or until the grains of rice are tender but still loose and distinct.

4. Fluff the rice with a fork: it should be fluffy and fairly dry, but if it seems too dry, moisten it with a little reserved broth. Turn it into a serving dish, sprinkle with chopped mint, and serve.

Are you sure that my grandmother, AKA Monnie, didn't teach you this method? It's exactly how my family makes Hoppin' John! I even used pancetta this year. Your blogs are the best and I definitely think that you need to publish them in book form. It would be a bestseller,for sure. Keep up the good work and the happiest of New Years to you.

She didn't, but she sounds like my kind of gal! Wish I had known her!