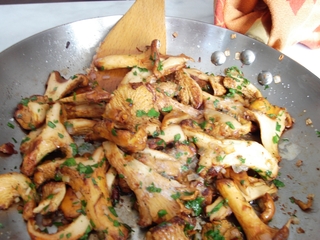 Late season Chanterelles sauteed as in the recipe given here, photographed on November 18; they're larger and meatier than the early season mushrooms I used when the accompanying story was written.
One of the loveliest things about late summer and early autumn in the Carolina and Georgia Lowcountry is the annual sprouting of chanterelle mushrooms, the yellow-orange trumpet mushrooms that briefly dot oak-shaded lawns and parks. Their flavor is delicate but distinctive, and well worth seeking out.

Foraging for them requires two things: a thorough knowledge of wild mushrooms and a sense of responsibility. Though wild-growing chanterelles are distinctive and easy to spot, novices can, and have, gone wrong, and over-harvesting or careless gathering by the greedy have all-too-often depleted many once plentiful beds.

In his masterpiece on Lowcountry cooking, John Martin Taylor (a.k.a. Hoppin’ John) instructs that the responsible way to gather chanterelles is to cut the stem just above the ground with a small knife or very sharp scissors rather than plucking them, so that they leave their genetic imprint behind for next year. You should also not be greedy and gather more than your share.

If all that intimidates you, or if you live in an area where these wonders don’t grow, farmed chanterelles are now available in many specialty grocers. While they’re expensive and won’t have the flavor of freshly harvested wild mushrooms, they are still delicious and well worth your while.

Since I don’t have a ready source for gathering them locally, the market is where I usually get mine, and when I spied a bin of them in a local specialty grocery, looking bright, fresh, and meaty, it was impossible to resist them, even at close to twenty dollars a pound. It’s only once a year, after all.

Regardless of how you come by them, preparing chanterelles for the table is a simple operation. Lowcountry cooks have long known that they need very little kitchen conjuring to bring out their best. The secret to perfection is a generous hand with the best butter that you can find.

1. Gently brush any soil from the mushrooms with a dry cloth and thickly slice the large ones and halve the smaller ones. Melt 4 tablespoons of butter in a large skillet or sauté pan over medium heat. When it is barely melted, swirl the pan and add the shallots. Sauté, tossing often, until they are translucent and beginning to color.

2. Add the chanterelles and garlic and rapidly toss to coat with butter. Sauté, tossing, until the garlic is fragrant and beginning to color and the shallots are golden, about a minute.

3. Season to taste with salt and pepper, and sprinkle in the parsley. Let them heat, tossing, half a minute longer and take them off the heat. Add the remaining butter cut into bits and shake the pan until it is just melted. Eat them as is, or over (not in) omelets, or over pan-toasted bread, or as a sauce for pasta.

* Parma butter is a by-product of Parmigiano-Reggiano cheese manufacturing, but don’t think of it as leftovers: it’s made from the rich, skimmed cream from the night milk. It, and sometimes excellent-quality French butter, can often be found in specialty grocers.

Serving Up the Chanterelles

Over an omelet: It is hard to beat chanterelles over (not in) an omelet made with fluffy newly-laid eggs. Prepare the mushrooms first and keep them warm, then make the omelets and spoon the chanterelles over them after they’re plated.

Over pan-toasted bread: Cut ½-inch thick slices from a good quality round loaf. Generously spread both sides with softened butter and put them in a skillet over medium heat. Pan-toast turning several times, until uniformly golden and crisp on the outside but still soft at the center. Keep them warm. Prepare the chanterelles as above, put the toast on 4 warmed salad plates, and top with the mushrooms.

With Pasta: This is how I had mine. Bring 4 quarts water to a boil, add a small handful of salt, and cook ¾ pound of pasta while you prepare the mushrooms in a pan large enough to hold the pasta up to the point of adding the finishing butter but don’t add it. When the pasta is done, drain, saving a little of its cooking water, and add it to the mushrooms over low heat. Toss well, adding a little of the cooking water if it’s too dry, then add the finishing butter and toss until it is melted and incorporated. Serve immediately. Good pasta choices: homemade egg tagliatelle, or short factory pasta such as penne, campanelle, lumache (snail-shaped), or ziti.

I love the chanterelles in the spring time. Their arrival makes me happy because the weather is also changing.
A favorite way to serve them, for me, is to place the sauteed mushrooms in a gratin dish and top them with a traditional mousseline sauce: hollandaise with whipped heavy cream folded in. Brown it under a broiler and enjoy!

I live in the woods. Eat a lot of wild mushrooms. The best dish of the year for them is my Chanterelle Lasagne. It is a real treat. If I had your e-mail, I would send you a photo and recipe

Try putting 2 Tb of Hellman's in your cornbread, instead of butter or bacon droppings.