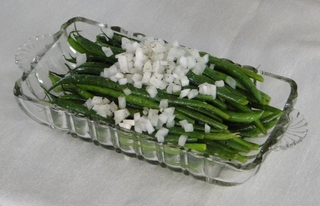 My mother's "pickled green beans" or green bean salad, in her cut glass relish dish
On this Independence Day, it occurs to me that my imagination probably spends way too much time wandering in the garden and kitchen at Monticello, the iconic home of founding father Thomas Jefferson. One has only to visit it once to understand why—or to comprehend the deep love for it that inspired him to write, “all my dreams end where I hope my days will end, at Monticello.”
But today, with other, more stirring, words from his pen in the air, it is probably inevitable that my thoughts should turn to that hill again, and in a funny way, thinking of Jefferson’s garden and table always brings me home.
Now, Monticello is a world apart from the small-town life of my childhood, but my mother and Jefferson have a lot in common—at least, when it comes to dinner.
All her life she has shared his passion for growing things and experimenting with new plants. (Who else in the deep South was growing kohlrabi in the sixties?) She has also shared his famous diet, which consisted mostly of freshly gathered vegetables, simply dressed.
Nothing illustrates that better than a defining element of my mother’s summer table: slim, immature green beans, cooked but dressed with vinaigrette and served at room temperature, which is the very same way Jefferson himself enjoyed them. James, Peter, Edy and Fanny (the slaves who governed Monticello’s kitchen) probably could not have counted the number of times they sent up that from the kitchen during the season.
Mama called her version “pickled beans,” and they came to our table mounded on a rectangular, cut glass relish dish, neatly aligned like chord wood and garnished with finely minced onions—as lovely to look at as they were to eat.
I just happen to have one of her cut glass relish dishes, and though the slim little haricots verts that filled it did not, sad to say, come from her garden, they still seemed just the thing for celebrating Independence Day.

The beans you want for this salad should be as young as possible, very thin and small—preferably no more than three inches long—such as true young French haricots verts. Once again, Mary Randolph captured the way they were cooked at Monticello:

Cut off the stalk end first, and then turn to the point and strip off the strings; if not quite fresh, have a bowl of spring water, with a little salt dissolved in it, standing before you, as the beans are cleansed and trimmed, throw them in; when all are done, put them on the fire in boiling water with some salt in it; when they have boiled fifteen or twenty minutes, take one out and taste it; as soon as they are tender, take them up, and throw them into a colander to drain. To send up the beans whole, when they are young, is much the best method, and their delicate flavor and color is much better preserved. When a little more grown, they must be cut across, in two, after stringing; and for common tables, they are split, and divided across; but those who are nice, do not use them at such a growth as to require splitting.

Most modern haricots verts will not take as long as Mrs. Randolph suggests here, and at any rate, she wanted her reader to watch the pot, not the clock. In my youth, good olive oil was hard to come by in the farming communities and small towns where we lived, so the oil was mostly peanut or some generic “salad” oil. Now that she can get it, she often dresses even warm vegetables with a good fruity olive oil.

1. Have ready a basin of cool water. Snap off the stem end of the beans, pulling off the strings (if there are any) as you go, then snap off the pointed tails and make sure that all the string has been removed (if it’s a stringless variety, don’t tail them—it’s not necessary). Drop them as they are trimmed into the water and let them soak for at least 15 minutes to freshen them. Prepare a basin of ice and water.

2. Put 4 quarts of water in a large, heavy-bottomed pot and bring it to a boil over medium-high heat. Throw in a small handful of salt.

3. Lift the beans from their soaking water and add them to the pot a handful at a time. Cover, let it come back to a boil, and remove the lid. Cook until al dente— still bright green and firm to the bite but no longer crunchy, about 4-to-6 minutes. True haricots verts may require a minute or so more. Drain and immediately immerse them in the ice water to arrest the cooking. Let them get cold and then drain well.

3. Put the beans in a bowl and strew 2 tablespoons of minced onion over them. Season with salt, a few grindings of pepper, and a couple of spoonfuls of vinegar. My mother often adds a teaspoon or so of sugar for a sweet-sour note. Toss well, taste, and correct the vinegar and seasonings—going easy; the flavor will intensify as they marinate. Cover and marinate for at least a thirty minutes or up to an hour.

4. When you are ready to serve the beans, drizzle them with olive oil—just enough to give them a nice gloss—and toss until evenly coated. Arrange on a shallow serving dish, sprinkle the top with the remaining spoonful of minced onion, and serve at once.

Now, that is how my mother does it. Nowadays I always reverse the oil and vinegar, adding the latter just before serving so that the beans retain their bright color, but admit that they taste better Mama’s way, even though the acid dulls them to army-fatigue olive.

Oh, Mr. F, such a sweet tribute to your mom ... and such a lovely simple dish.

I think this would be a lovely way to serve other veggies as well! I am having visions of young carrots and zucchini....even sliced raw radishes....hmmmm.

Mimi, dressing cooked vegetables with vinaigrette is classic French cooking, and, yes, it can be applied to almost any vegetable.