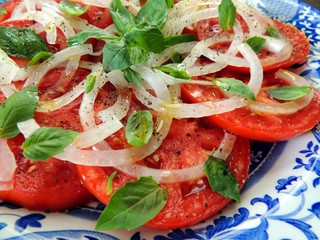 A surer sign of summer than ants at a picnic is the annual reappearance of one of America’s most enduring food myths: that we believed tomatoes were poisonous until the beginning of the nineteenth century, and still thought them unsafe to eat raw for decades after that.

The myth is often accompanied by an equally popular tale of how some prominent American like Daniel Webster or Thomas Jefferson ate a raw tomato on the local courthouse steps to prove to his neighbors that it was not only safe, but good.

There have been many spin-offs of this myth, my personal favorite being a “factoid” on a televised history of hotdogs asserting in all seriousness that because tomatoes were believed to be poisonous, tomato ketchup was created as a medicinal tonic.

Never mind that our word ketchup (or catsup) is a culinary term, derived from a Southeast-Asian word for fish sauce, and has never been used in medicine. (Honestly: where do these people get this stuff?) By the time the earliest printed recipes for tomato ketchup began to appear (decades before that factoid claimed), everyone knew that tomatoes weren’t poisonous, and the condiment was already popular in American kitchens, and not, rest assured, as a tonic.

One reason such nonsense is so stubbornly perpetuated is in part because journalists and pop-culture historians tend to ignore the South. Even before the first cookbooks penned by Southerners made print, there were manuscript recipes for cooked tomatoes dating as early as 1770, the year the prominent Charleston matron Harriott Pinckney Horry probably recorded how “To Keep Tomatoes for Winter Use ” in her household notebook.

The title alone suggests that by the time Mrs. Horry put the recipe to paper, Carolinians had been routinely consuming cooked tomatoes for decades.

Printed American recipes for raw tomato salad go back at least as far as 1824, when Mary Randolph included “Gaspacha,” a thick soup-like Spanish salad of raw tomatoes, cucumbers, onions, and peppers, in The Virginia House-wife. One might argue that the recipe, which probably came to Mrs. Randolph by way of a sister who once lived in Cadiz, was an out of place curiosity were it not for the fact that gazpacho quickly became popular in Virginia, suggesting that people in the region were long accustomed to eating raw tomatoes.

Indeed, within a very few years, other Southern cookbook authors were treating tomato salad in a very off-hand way:

Take ripe tomatoes, that are large and fine, peel and slice them tolerably thick, put them in a deep dish, and season them highly with salt, pepper, and vinegar. This is a delicious breakfast dish, and is also a fine accompaniment to roast meats, for a dinner.”

Tomatoes may be eaten raw, cut up with salt, oil, vinegar and pepper, as you do cucumbers.”

By the beginning of the War Between the States, onion was a popular addition:

What brings this all to the fore is one perfectly ripe tomato from my mother’s garden. For the first time in many years, I was able to be with my father on Father’s Day. The tomato plants in mother’s garden were just beginning to bear, and she gave me one handsome specimen to bring home—just enough for a salad for two.

With all due respect to Mrs. Hill, I was not about to spoil that beautiful tomato with scalding water and sugar. Once cored and thinly sliced, it was easy to slip the peel off with the narrow blade of a peeling knife. Spread on a plate and dressed, as Mrs. Hill directed, with shaved Vidalia sweet onion, salt, pepper, and a few drops of sherry vinegar, I strayed only by using a scattering of freshly snipped basil instead of sugar.

Sharing the plate with more of my mother’s produce (early half-runner beans and sweet yellow squash) and a bit of pork tenderloin pan roasted with sage and onions, that salad carried me back to the big Sunday lunches of childhood, a poignant reminder of how much we took for granted back then—and how much we’ve lost.

When my mom got her first space for a veggie patch, she immediately ran out to the local nursery and bought tomato and zucchini plants. Until then (1984) I never knew that tomatoes didn't come from the local market. I had no way of growing them. I had no idea that home-grown tasted so much better. Since that day, I have tried to grow my own. Normally I plant seeds and grow many varieties of heirloom tomatoes. They taste superior and there is nothing like seeing your own child eating tomatoes off the vine!

What is better than a tomato salad on a hot sticky day?