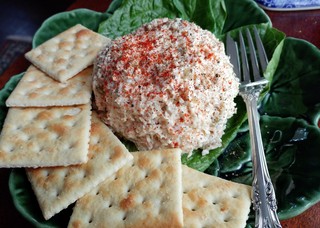 We were just home from a quick trip to Charleston to catch up with my friend and mentor Nathalie Dupree and get in a couple of Spoleto concerts. It was midafternoon and we were tired and hungry. The refrigerator gave up a bit of leftover poached chicken and, because I’m Southern, there’s always mayonnaise and what the old cooks called “made mustard.” A quick survey turned up a nearly empty jar of bread-and-butter pickles that needed to be finished off, and while the celery was old and not very promising, there’s always onions in the pantry.

Sometimes, knowing when to leave well enough alone is a cook’s best asset. The oldest Southern recipes for chicken salad were a simple triad of chicken, celery, and a dressing made with hard-cooked egg yolks, vinegar, mustard, and either olive oil or, because good oil was often hard to come by, melted butter. They all cautioned that the dressing not be added until just before serving because it would otherwise toughen the chicken.

What those old cooks would think of most deli chicken salads would probably not be printable.

By the time of Mrs. Dull’s iconic 1928 Southern Cooking, mayonnaise had become the standard dressing. Pickles, olives, and capers started creeping into it by the middle of the nineteenth century but weren’t commonplace until well into our century (Mrs. Dull didn’t include them).

In short, chicken salad remained simple until we got clever and started reinventing everything. Until after World War II, chicken was an expensive luxury (there are even recipes for mock chicken salad made with pork and veal). One just didn’t fool around with luxury. After chickens began to be raised in masses on cheap feed, they became inexpensive and lost their cachet. Unfortunately, that wasn’t all they lost. With the cachet went most of their flavor. That was when we started going a little overboard and began to overcomplicate chicken salad.

But back to the moment: It was good chicken, raised on grain and what it could forage, so it didn’t need a lot of help. That salad took all of ten minutes to put together, and what it offered was a lot more than sustenance.

If you’ve got good fresh celery on hand, by all means scrub a rib or two, string and chop them fine, and add them to the mix.

1. Roughly shred the chicken into a food processor work bowl fitted with the steel chopping blade, put on the lid, and pulse until the chicken is chopped fine. Turn it out into a bowl, add the onion and pickle, and gently toss to mix.

2. Add enough mayonnaise, starting with about ½ cup, to just bind it together. Add the mustard, a large pinch of salt, and a teaspoon or so of pickle juice. Mix well, adding mayonnaise by spoonfuls as needed, until it’s just holding together. Taste and adjust the mustard, salt and pickle juice. Mix well, and if not serving right away, cover and refrigerate until needed.

3. If serving it scooped over lettuce as a salad, you might garnish it with a sprinkling of black pepper or sweet paprika, or a bit of both.

Poached Chicken for Salads and Casseroles

You want bone-in chicken for poaching, even if it’s only the breast. It won’t take more than a minute or so to skin and bone it when it’s done and the meat (especially the breast) stays moist and will have far more flavor.

Makes About 3½-4 cups cooked, shredded or diced chicken and about 4 cups broth

1. Put the chicken in a heavy-bottomed 4-quart Dutch oven. Add the onion, celery, carrot, parsley, peppercorns, and gingerroot. Completely cover it with broth or water and add a large pinch of salt. Loosely cover and bring to simmer over medium heat, then reduce the heat to medium-low and simmer until fork tender, about 45 minutes to 1 hour.

2. Using tongs, remove the chicken from pan and let it cool enough to handle, then skin and bone it. To give the broth more flavor, return the skin and bones to pot and continue simmering broth for another 30-45 minutes. Meanwhile, roughly shred the meat and cover.

3. Strain the broth and skim off the excess fat or let settle, chill, and remove fat when solidified. Cover and refrigerate or freeze it for use in soup or gravy.