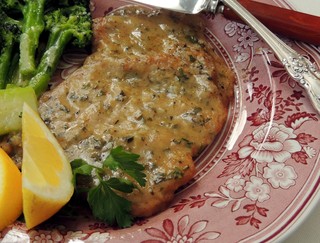 Now, collop is an old English word for a thin slice of meat. It could be used for anything from veal to bacon, though it most commonly described thin slices of veal or beef round. They were usually fried in butter or lard and sauced with a rich gravy made from the deglazed pan juices—essentially the same as Italian scaloppine.

The origin of the word is obscure, but Swedish kollop and German klops are often suggested, and it’s also possible that it (or all of them) derives from the same word that became “scaloppine” in Italian and “escalope” in French.

As for “Scotch,” in this instance it actually had nothing directly to do with Scotland. In the oldest recipes, it meant the meat had been “scotched,” that is, scored in a crisscross with a knife.

That is not, however, what Mrs. Colquitt described. Here’s her recipe:

Two pounds of round of beef, put through the meat grinder. Remove all the strings, and season with salt and pepper, a pinch of allspice, and a little thyme. Put a tablespoon of finely chopped white meat and a teaspoon of butter and a teaspoon of finely chopped onion in a saucepan, and cook together and then add the ground beef. Stir often, and add one-half cup of tomato juice. Stir until thoroughly done. Can have it soft or dry, as preferred.

Needless to say, it was neither a collop nor scotched, but something more closely akin to picadillo. Here’s the dish as it was made in the late eighteenth and early nineteenth centuries in our country, an elaborate, highly-seasoned one from the household receipt book of a Charleston matron and a more straightforward version from the indomitable Mary Randolph, the earliest known chronicler of Virginia cookery.

Take a Leg of Veal cut off as much into thin slices as you think will make a dish. Beat it with your rowling Pin, scratch it with a knife, Lard it with Lemon Peele, Bacon, and Thyme: then take sweet Marjoram, savory, Parsley, Young Onions, Pepper, Salt and a little Nutmeg. Chop them fine, and rub the Meat well with them. Fry them in a little fresh Butter, when they are fried enough take them out of the Pan and have ready a little strong Gravy, and dissolve some Anchovies in it, a glass of Claret, a Chalot [shallot] or two a Lemon wrung in it and some lemon peele shred, let it stew between two dishes, and beat a peice [piece] of Butter with the Yolk of an Egg and thicken it up and pour it over your meat, with Crispt Bacon, fried Oysters, Mushrooms, Sweet Bread pulld in little Pieces, and forced meat Balls. Garnish with Horseradish and Barberries. Serve it—

They may be made of the nice part of the rack, or cut from the fillet, rub a little salt and pepper on them and fry them a light brown, have a rich gravy seasoned with wine and any kind of catsup you choose, with a few cloves of garlic and some pounded mace, thicken it, put the collops in, and stew them a short time, take them out, strain the gravy over and garnish with bunches of parsley fried crisp, thin slices of middling of bacon curled around a skewer and boiled [most likely a printing error—broiled was probably her intention].

What in the world happened over that century in between the Mrs. Horry and Randolph and Mrs. Colquitt? How did such a lovely dish get corrupted into ground beef stewed in tomato juice?

It’s a real mystery. Well, maybe not quite as juicy as an Agatha Christie or P. D. James, but it’s exactly the kind of cozy puzzle that culinary historians love. Part of the answer can be found in several English books that came along over the course of that century in between.

In Beeton’s Book of Household Management of 1861 (a book that borrowed wholesale from other cookbooks of the period), Scotch Collops is the name given a recipe for dressing thin slices of leftover veal roast. Notice that the meat is not “scotched.”

Mode.—Cut the veal the same thickness as for cutlets, rather longer than a crown-piece; flour the meat well, and fry a light brown in butter; dredge again with flour, and add ½ pint of water, pouring it in by degrees; set it on the fire, and when it boils, add the onion and mace, and let it simmer very gently about ¾ hour; flavour the gravy with lemon-juice, peel, wine, and ketchup, in the above proportion; give one boil, and serve.

A common variation on collops as a means for using up leftovers was “minced collops.” Cooked slices of meat, whether from a roast or a dish of collops were chopped fine and stewed in gravy. But that’s chopped cooked meat. A clue for how raw ground beef found its way into the recipe turns up in a book that was published sixteen years before Beeton’s, Eliza Acton’s ground-breaking Modern Cookery for Private Families of 1845:

Chop the beef small, season it with salt and pepper, put it, in its raw state, into small jars and pour on the top some clarified butter. When wanted for use, put the clarified butter into a frying-pan, and slice some onions into the pan and fry them. Add a little water to them, and put in the minced meat. Stew it well, and in a few minutes it will be fit to serve.

Miss Acton, who happened to be one of the finest food writers of her day, was plainly presenting a method for storing raw chopped meat to be cooked as needed. And since she wasn’t inclined to caprice, we can be pretty sure her recipe was a reflection of common practice, especially since her recipe varies from Mrs. Colquitt’s only in details and seasonings.

By Mrs. Colquitt’s day, “Collop” as a slice of meat had become archaic and the descriptive adjective “minced” had been dropped.

That’s not all that was dropped, either. But that’s another tale for another time.

In the end, the best way to savor the mystery of the corrupted collop is to actually taste it. The following are my own versions of the old Scotched Collops and the Minced Collops that evolved from its leftovers.

From my first book, Classical Southern Cooking, this can also be made with pork tenderloin, which is far cheaper and by far more tasty than most of the veal that’s available to us nowadays. To make pork tenderloin collops, trim a pair of pork tenderloins, remove the silver-skin, and cut off the tapered tips, setting those aside for another use. Cut the tenderloins into medallions about 1¼ inch thick (just like a filet steak), lay them between sheets of plastic wrap, and gently pound them out until they’re only about 1/8-inch thick, then proceed from step 2. You may
scotch them, if you like, but the pork really doesn’t need it and I never do.

1. Lay the veal on a work surface between two sheets of plastic wrap and pound each slice out until it’s 1/8-inch thick.

2. Score each lightly in a crisscross with a sharp knife, being careful not to cut all the way through the meat, and rub well with sage and nutmeg.

3. In a heavy skillet, melt 4 tablespoons of the butter over medium-high heat. When it starts to bubble, put in some of the scallops and sauté until barely cooked through, about 1 minute per side. Take them up onto a warm platter and repeat until all the meat has been cooked. Season with salt and pepper to taste, cover the platter, and keep warm.

4. Add the shallots to the pan and sauté until they begin to color the palest gold. Add the garlic, lemon zest, and parsley, stir until fragrant, 15-20 seconds, then slowly add the broth, stirring constantly. Let it boil up, stirring and scraping the pan to loosen any browned residue, and add the wine and lemon juice. Let it come back to a boil and remove the pan from the heat.

5. Whisk in the egg yolk and then the remaining butter, a little at a time, taste and adjust the seasoning, and return the veal to the pan, turning it over several times in the sauce, then transfer it to a platter and serve at once.

My own adaptation of minced collops based on nineteenth century recipes and Mrs. Colquitt’s recipe from 1932.

1. Put the butter and onion in a large, heavy-bottomed pan over medium heat. Cook, stirring often, until it’s translucent and softened but not colored, about 2-3 minutes. Add the garlic and simmer until fragrant, about 15-20 seconds.

2. Crumble the beef into the pan and cook, stirring often, until it loses its raw red color. Season it well with salt, pepper, and nutmeg, and add the thyme. Stir well and slowly add the wine. Let it simmer until almost liquid is mostly evaporated, then add the tomatoes. Season it well with Worcestershire, add the sugar, and bring to a simmer.

3. Adjust the heat to a slow simmer, and cook, stirring occasionally, until the meat is tender and the juices are thickened, about 30 minutes. Serve over rice, garnished if liked with parsley.