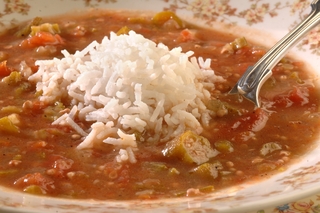 One of the key foundations on which so much of Southern cooking is built is the rather magical pairing of okra with tomatoes. From Maryland to Florida, Virginia to Texas, whether it's simply the two vegetables simmered together, a thick gumbo, or a complex pot of vegetable soup in which they're joined by everything else in the garden, the combination is practically universal.

Exactly how they came together is murky territory for historians. However, since tomatoes were introduced to West Africa by Portuguese explorers early in the sixteenth century, it seems logical that the idea sprang from the mind of an African cook. And it's significant that the first (if not only) appearance of this pairing in American cookery is in the South, where there were enslaved Africans in many kitchens.

At any rate, it quickly took root down here. When Mary Randolph set down her recipe for "ocra and tomatas" in The Virginia House-wife in 1824, the combination was already deeply engrained. Down in the Carolina and Georgia Lowcountry, for example, it was a defining element of the local cuisine when Mrs. Randolph was in diapers.

In Savannah, the characteristic dish that spun off this pairing is Okra Soup, a simple mélange of tomatoes, okra, and broth made from both beef and ham. Once a staple soup course throughout the summer for formal two o'clock dinners and main dish for businessmen's lunches and family suppers, its real beauty as a culinary concept is that it can be both refined and elegant and coarse and hearty.

Regardless of how and when it's served, okra soup always comes with a large spoonful of steamed rice. Once, fiery little bird peppers and/or Pepper Sherry were offered as well. The peppers were passed in a small bowl, and each guest took just one to crush in the bottom of the soup plate, but removed it before the soup was ladled in (they're so hot that that's all most people could stand). Pepper sherry, equally as hot but more refined, made the rounds in a cut glass cruet, to be added in mere droplets at the diner's discretion.

2. When you're ready to finish the soup, bring it back to a simmer over medium heat. Stir in the okra and tomatoes, loosely cover, and let it come back to a simmer. Uncover, reduce the heat, and simmer gently for about 20 minutes.

3. Taste and season with salt and pepper. Simmer, uncovered, until the vegetables are tender and the soup is quite thick, at least an hour more—longer won't hurt. Remove the beef and ham hock. Some cooks pick the meat from the bone and add it back to the soup. Others frown on this practice. Discard the bones.

To make Pepper Sherry: put a third of a cup of bird's eye peppers (or as much as half a cup of other hot peppers) in a heatproof bowl. Pour a cup of boiling water over them, let stand for one minute, then drain and transfer the peppers to a glass cruet or jar that will hold one and a half cups. Add a cup of medium dry sherry, cover, and let step for at least a day before using.