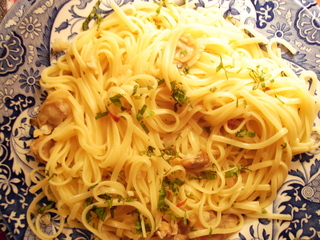 Linguine with Marcella's White Clam Sauce
A popular, trend-conscious food magazine recently published a piece proudly touted on its cover as “Our best 3-ingredient recipes ever!”

Forgive me for sounding irritable, but it can’t be helped: I sound irritated because I am. The title alone was enough to annoy, but the recipes themselves—well! Never mind that most of them did not, in fact, have only three ingredients: most had five to six (salt and pepper are ingredients—two of them; so is olive oil). That’s neither here nor there: the point is, sound cooking is not and never should be confined by numbers.

A long list of ingredients doesn’t necessarily make a dish complicated. A curry can have a dozen spices and at least half a dozen other ingredients besides, and yet it is neither complicated nor a challenge to prepare. On the other hand, a recipe with only three or four components can be very complicated indeed—and can all too easily go wrong if for no other reason than its simplicity leaves very little margin for error. And if you don’t think of salt and pepper as separate (and important) ingredients, try leaving one of them out, or recall what happens when too much of either gets into the pot.

The point is that there’s no point to being preoccupied by numbers in cooking. A recipe should have nothing extraneous, but neither should it be shortchanged simply for the sake of something as arbitrary as a random number limit. One of the only recipes that actually did contain just three items was a glorified version of those inordinately popular 1960s desserts assembled from a handful of packaged ingredients. It frankly sounded about as interesting as gelatin salad. A ripe piece of fruit, a bit of cheese, and perhaps a handful of pecans or walnuts (note—that’s just three ingredients) would have been far more satisfying—and a lot less trouble.

It would probably not, however, have gotten the attention of that magazine’s readers, and, after all, that’s all the story was, a gimmick to get attention. It probably won’t displease them that the attention they got from this quarter was negative: when one plays the numbers game, even negative attention becomes a positive.

I’ll leave them to play alone. Last night was a rare evening when I was alone for supper. While considering what to make that would be both simple and satisfying, I happened on some beautiful littleneck clams in the market and knew exactly what to make with them: Marcella Hazan’s lovely white clam sauce from Classic Italian Cooking. Now, that is a dish with true economy of ingredients. There were more than three, but who cares? The clams were the only one that had to be purchased; everything else was stock that could be found in any good cook’s pantry. What really matters is, there was nothing extraneous, but neither was there anything missing. It took just minutes to prepare and was deeply satisfying—both to make and to eat.

Put the shallot and oil in a small saucepan and sauté over medium high heat until translucent. Add the garlic and sauté until lightly colored. Add the parsley and hot pepper and stir three or four times, then add the wine. Allow the wine to boil until is has evaporated by half, then turn off the heat. The sauce may be prepared several hours ahead of time up to this point.

Bring 4 quarts of water to a rapid boil. Meanwhile, filter the clam juices through a sieve lined with paper towels. You should have about 2/3 cup. If there is more, discard it. Add the liquid to the sauce and boil until it is reduced by half.

Add the clams, turn them quickly in the hot sauce, and turn off the heat. Add the butter and cheese and mix thoroughly. Taste and correct for salt. (No salt may be required, especially in the summer, when clams seem to be saltier.)

Add 1½ teaspoons salt to the boiling water, then drop in the pasta and cook until it is al dente. (The time will vary depending on the pasta you are using: fresh pasta may cook in as little as 2 minutes; dried factory linguine may take as many as 8.) When it is al dente, immediately drain and transfer it to a warm bowl. Add the sauce, toss well, and serve immediately, passing more grated Parmigiano if liked.
2 Comments

I think you can extend the numbers conversation to time, temperature, teaspoons ....for lack of a "T" word for measurement. Just as water boils at different temps at different air pressures or altitudes etc. I think the other ingredients have to be tweaked depending on the circumstances. Recipes are always stating season to taste. Well I consider that license to adjust time, temperature, or amounts and whether or not the guest is a garlic lover or hater (figuratively speaking). The point is, there are social and convenience reasons to adjust recipes sometimes. I sometimes add a variety of ingredients to a hotdog, and sometimes intentionally leave them off. Good cooking is circumstantially versatile. I'm not a good cook, but I have a life time of experience eating good cooking.

Sigh, looking for a hook, a gimmick to get eyes on the page, sadly leads to silliness. I can't tell you how many times at book events someone picks up the book and says, are there alot of ingredients, does it take time to make these? I know people are busy, but yes, some chopping may be required.