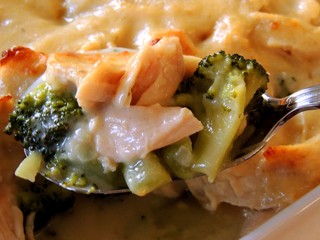 One of the great dishes of mid-to-late twentieth century American cooking is Chicken Divan, a layered gratin of broccoli, chicken breast and a velouté sauce enriched with cheese. Believed to have been name for its place of origin, the Divan Parisien Restaurant in New York City’s old Hotel Chatham (which stood at Vanderbilt Avenue between East 48th and 49th Streets), it was probably created sometime in the 1940s and is credited to Chef Anthony Lagasi.*

For a description of the original Chicken Divan, Saveur Magazine turned to Lawton Mackall’s Knife and Fork in New York, published by Doubleday & Company in 1949, in which it was described as “sliced chicken breast on broccoli in a sherry-laced sauce of cheese and cream, browned and brought to table bubbling hot.”

Like so many iconic dishes that were popularized in the middle of the twentieth century, there are many paths down which Chicken Divan has since strayed and there are dozens of permutations that go by the name.

The bed of broccoli appears in almost every form imaginable from spears to bite-sized florets to chopped. The chicken breast is sliced, diced, shredded and even left whole.

The sauce varies from a straightforward Mornay to a blend of canned cream soup and mayonnaise, and the cheese included is anything from Parmesan or Gruyere to cheddar and even Velveeta. There are recipes adding almonds, water chestnuts, mushrooms, Worcestershire sauce, curry powder, and lime juice.

Well. Never mind all that.

This classic has survived because core of broccoli, chicken, and creamy sauce (either enriched with cheese or layered with it) is perfect comfort-food. It’s an ideal casserole for a Sunday supper with company or for a weeknight with family.

*The hotel and restaurant have since been demolished and Chef Lagasi died in 1997.

This is my own version, which hasn’t strayed very far from what I’ve been able to piece together of the original. The chicken for this is first slow simmered until it’s fork-tender, and its cooking liquid is used in making the sauce. It’s a little involved, but well worth going to the extra trouble, and besides, the chicken can be cooked well ahead of time. The recipe is included at the end. I’ve sliced, diced, and shredded chicken, and that last is the one that I have come to prefer.

Although the original sauce contained wine (sherry or one source says dry white wine), I actually prefer this without it, and give it as optional.

1. Put at least 1-inch of water into a pot fitted with steamer insert, cover, and bring the water to a rolling boil. Meanwhile, trim and peel stems of the broccoli and cut each stalk into 2-3 pieces. Put them in the steamer insert and set over boiling water, cover, and steam 2 minutes. Uncover and season with salt, cover, and cook until tender but still bright green, about 4-5 minutes longer. Uncover, remove the broccoli and rinse it well under cold running water. Let it cool enough to handle and cut it into bite-sized pieces.

2. Position rack in center of oven and preheat to 350° F. Put the butter and onion in a wide 2-3 quart heavy-bottomed saucepan over medium heat. Sauté until softened, but not colored, about 4-5 minutes. Sprinkle in the flour and whisk until smooth. Slowly whisk in the broth and milk, bring it to a simmer, stirring constantly, and cook until thickened and bubbly. Season to taste with salt, pepper, and nutmeg and stir in the optional sherry. Bring it back to a simmer and let simmer 3-4 minutes longer. Turn off the heat.

4. Butter a shallow 2-to-2½-quart casserole. Arrange the broccoli over the bottom of the dish. Sprinkle ½ cup of the cheese over it. Scatter the shredded chicken among and over the broccoli. Sprinkle it with ½-cup of the cheese. Stir the sauce and pour it evenly over the chicken and broccoli, smooth the top, and sprinkle the remaining cheese over the top. Bake in the center of the oven until bubbly and lightly browned, about 30-35 minutes. Let it rest 10 minutes before serving.


Slow-Simmered Chicken Breast
for Chicken Divan or other casseroles
Use bone-in chicken for this: it’ll stay moist and have much more flavor.
Makes About 3 cups cooked, shredded or diced chicken and 4 cups broth

1. Put the chicken breasts in a heavy-bottomed 3-4-quart Dutch oven. Add the onion, celery, carrot, parsley, peppercorns, and gingerroot. Completely cover with broth or water and add a large pinch of salt. Loosely cover and bring it to simmer over medium heat, reduce heat to medium-low, and simmer until the chicken is fork tender, about 45 minutes.

2. Using tongs, remove the chicken breasts from the pan and let them cool enough to handle, then skin and bone them. Return the skin and bones to the pot and continue simmering the broth for another 30-45 minutes. Meanwhile, roughly shred the meat and cover.

3. Strain the broth and skim off the excess fat.