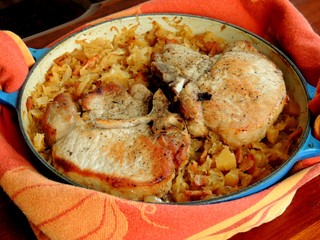 It was a crisp fall evening in the early days of my graduate school work at Clemson University, and we actually had something that architecture students rarely see: an evening free of deadlines.

I’d just moved off campus into my first apartment on my own, a cozy four room half-basement affair tucked into the side of a hill, with a kitchen that, at long last, was completely mine. Every free moment back then was spent in that kitchen, experimenting, puttering, nibbling.

That evening, our little neighborhood grocery had two-packs of beautiful, thick center-cut pork chops on sale. We never had luxury cuts of meat like that when I was growing up. I’d never seen the like of them, and scooped up a packet and eagerly headed home.

This was before my discovering Marcella Hazan, and my cookbook library consisted of just four books: Charleston Receipts, paperbound copies of The James Beard Cookbook and From Julia Child’s Kitchen, and the almost encyclopedic 1970s edition of the Joy of Cooking.

A quick look through that last book turned up pork chops baked on a bed of sauerkraut. I didn’t have half the ingredients, but never mind: I’d make do. Using what was on hand, I made it up as I went, improvising as only an over-confident and very naïve young cook would dare to do.

It was soon in the oven and I settled in with a glass of wine (something else we never had when I was growing up) and a novel, feeling so grown up and sophisticated. But not nearly as sophisticated as when I settled in at the table a little over an hour later and took the first bite. My naïve improvising had actually worked: It wasn’t just edible; it was delicious. And, as a bonus, there was another one done for dinner on a night when there wasn’t time for puttering.

Not every experiment in that little kitchen had such a happy ending. But after four decades and fortunately few culinary disasters, I still go back to this dish, especially in the fall when I’m feeling nostalgic or my confidence is lagging. And it has never disappointed.

The original recipe was for four, and I made the full amount of sauerkraut even though there were only two chops. I still do that so that there will be leftover kraut to tuck into sandwiches with thinly sliced pork roast, corned beef, ham, or turkey. If you need to serve four people, all you have to do is add two more pork chops to the pan.

1. Position a rack in center of the oven and preheat it to 350° F. Wrap the pork chops with paper towels and pat them dry. Unwrap and season them well with salt and pepper.

2. Sauté the bacon in a flame-proof casserole (such as an enameled iron Dutch oven or braiser) over medium heat until golden brown. Remove it with a slotted spoon and drain it on paper towels. Add the chops and brown them well (about 3-4 minutes per side). Remove them and spoon off most of the fat.

3. Add the onion and sauté until translucent and golden, about 5 minutes. Add the apples and toss until hot through. Pour in the wine, stirring and scraping pan to loosen the cooking residue, then mix in the kraut, brown sugar, mustard, and reserved bacon. Season with pepper to taste, stir well, and level the top with a spatula. Lay the chops on top, cover tightly, and bake in center of the oven until the meat is cooked through and tender, about 1 hour.

4. Uncover and let them rest for 5-10 minutes before serving, but serve hot.

To core and slice or dice apples: Scrub the apple under cold running water, pat dry, and, if the recipe calls for it, peel it. Stand it on a cutting board, stem up, and with a large, sharp knife, cut straight down on either side of core. Lay the center core section flat on board. You’ll see exactly where core is: cut straight down either side and discard the core. Stand the two half-moon sides skin-side up and slice 1/8-inch thick. Lay the remaining rounds on their flat side and slice them in the same way. To cut dice as for the recipe above or for salads, slice the apple thickly (¼-to-½-inch) and cut each slice into ¼-to-½-inch dice.

I don't cook a lot out of the Joy of Cooking anymore, but it was a fabulous starting place for me in 1972, when I didn't know how to boil water. I was in my first real kitchen myself. It had a gas range, a gas refrigerator, a double sink and some shelves: almost perfect and definitely heaven. The only other cookbook I had was Charleston Receipts. There's a huge amount of good eating in both those books.

Then as now, I used it as a reference guide more than anything. It was a good basic starter book, especially with James Beard and Julia Child as supplements. The following summer after this, I discovered Marcella Hazan's first two books, Classic Italian Cooking and More Classic Italian Cooking, and they became my kitchen bibles. Thanks for reading and for sharing!