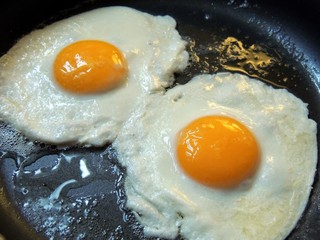 Perfect Sunny-Side-Up Eggs are, like all simple cooking, a matter of finesse

Yesterday, a regular reader asked me to devote one of my newspaper columns to the proper way of cooking a sunny-side-up egg. My first reaction was that it’s a very simple process that even a big mouth like me could not stretch out into an entire newspaper story.

My second reaction was to recall that, like all simple things, a properly fried egg does take a little finesse—and finesse is a virtue that is far too often overlooked in the kitchen, especially when the process is a simple one.

Sunny-side up is actually just another name for the classic American-style fried egg. And the real secret to success with it lies in understanding that “fried,” in this instance, is a misleading moniker. This process isn’t to be confused with a French “oeuf frit,” an egg that’s really deep fried until the surface of the white is crisp and golden and the yolk is creamy but still runny.

An American “fried” or sunny-side-up egg really has more in common with a French “oeuf sur la plat,” which is baked in a buttered shallow dish, since the egg doesn’t actually fry, but cooks gently over moderately-low heat in a pan lubricated with barely enough fat to prevent sticking. It isn’t turned (“over-easy”), and the thin film of white over the yolk is never allowed to cook until it’s opaque, so the yolk remains a bright orange-yellow, hence the name, “sunny-side-up.”

If the cook observes a few very simple rules before beginning, and exercises a bit of that finesse with the pan once the eggs are in it, the process is practically foolproof.

First, make sure the eggs are fresh and at room temperature before you try to cook them. Cold eggs won’t cook evenly. If you don’t have time to let them sit out of the refrigerator until they’ve warmed, submerge them in a bowl of very hot tap water for 2 minutes.

Choose a heavy-bottomed non-stick or well-seasoned carbon steel or cast iron pan for the job. A thin, lightweight pan is a sure ticket to failure.

Use barely enough fat to lightly film the bottom of the pan. Too much will make the eggs heavy, greasy, and pretty much indigestible.

Use medium-low heat unless you happen to want a crisp, browned edge on the eggs, and even then use only moderate heat. Anything livelier will make the white tough and cause the yolk to be dry and overcooked on the bottom.

If you want the white to be completely set and the yolk to be a little less runny, don’t raise the heat, but simply cover the pan. The residual steam will accomplish the job without making the egg tough. Some cooks even cover the pan as soon as the eggs are in it. Really, whatever works for you is fine.

1. If the eggs are straight from the refrigerator and you don’t have time to let the eggs sit until they warm to room temperature, put them in a heatproof bowl and cover them completely with hot tap water for 2 minutes, then drain thoroughly.

2. Warm the butter over medium low heat in a heavy-bottomed 10-inch non-stick pan or well-seasoned carbon steel or cast iron pan, swirling the butter as it melts until the entire bottom of the pan is evenly coated.

3. Break one of the eggs into a small bowl or ramekin and slip it into the pan. Quickly but gently push the yolk to the center of the white with a wooden spoon, and if the white spreads a lot (a sign of an older egg) gently push the edges inward to make a neat round. Repeat with the second egg. If your stove isn’t level and the eggs tend to flow to one side of the pan, add the first egg on the side that’s lowest and then turn the pan 180 degrees before adding the second egg. Let them gently cook until the white is just opaque and barely set, about a minute.

4. If you like the white to be a little more done on top or prefer the yolk a little more cooked, cover the pan with a lid or baste each egg with a spoonful of boiling water and then cover the pan. Whether covered or open, continue cooking until the white is set to your liking, about 1-to-1½ minutes longer. A proper fried egg should have a nicely set but still soft white and its yolk should be a bright sunny orange-yellow and still rather runny. Season with salt and pepper to taste, immediately take them up onto a warm plate, and serve at once.

Notes: Some love fried eggs with a crispy, browned edge. To accomplish it without making the white tough, melt the fat over medium heat and let it get almost bubbling hot before adding the eggs. They’ll bubble and sizzle the moment they touch the pan. Quickly but gently push the yolk to the center, let it cook until the bottom of the egg is just opaque, then lower the heat and continue as above.