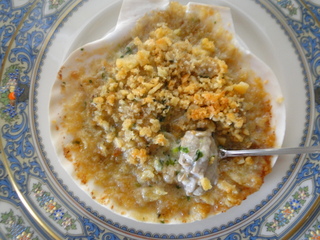 This morning my own stock pot came off the pantry shelf and I set to work cleaning and slicing carrots, celery, onions and gingerroot. Deciding to give the broth a little extra color and depth of flavor, I tossed my hoard of turkey wings and necks into a large roasting pan, lightly coated them with oil, and set them to roast in a hot oven (425° F. for about 45 minutes).

While that was going on, I washed and measured out a portion of the cranberries into a nice heavy saucepan, lightly crushed them with a potato masher, and, covering them well with water, put them on to simmer.

The weather outside is cold, gray, and damp, but the house is fragrant with the aroma from the simmering stock pot. The freshly-made, pectin-rich cranberry juice, strained through a cloth and as sparkling clear as liquid rubies, sits sunny and cheering on the counter, waiting to join whole berries, orange zest, and raw sugar in the saucepot.

All that means the make-ahead elements are under control, and as I look to the rest of the menu and cooking that lies ahead, my rather eclectic menu sets me to remembering the many Thanksgivings of my past.

Tradition has been defined as “how it was done when you were a child,” and when it comes to Thanksgiving dinner, there is certainly a lot of truth in that. But as I get older, I realize how much my own traditions have been enriched and changed over the years by more than fifty Thanksgivings shared with friends.

One of my most memorable was spent with dear friend and fellow cookbook author Ruth Adams Bronz, who hosts a crowd of up to thirty or more in her deliciously eccentric home—a converted Victorian storefront in Housatonic, Massachusetts. It was a time of harsh transition in my life, but that week of cooking, laughing, and sharing with Ruth, Rita Horvath, and a host of others was an oasis of peace and joy in a year of gut-wrenching turmoil that I have never forgotten. I can recall every dish in surprising detail, but one of them stands out over the rest: Ruth’s grandmother “Lucy-Mama’s” scalloped oysters.

It’s the one dish that Ruth dare not omit from the menu: the one time she tried, her regular guests came dangerously close to mutiny. And now Lucy-Mama’s oysters are a regular part of my own Thanksgiving tradition. I’ve never been able to go back to Ruth’s for the holiday, but as I stir the oysters together, pop them into the oven, and eventually take my first bite, a little of the soothing peace of Ruth’s Thanksgiving haven comes back and settles into my soul.

And I am warmed.

2. Melt 2/3 of the butter in a large skillet over medium heat until foamy. Add 2/3 of the saltine crumbs and stir until they’re evenly coated. Add the parsley and scallions and toss (mixture should be quite dry and just beginning to brown). Add the oyster liquid and cream and simmer, stirring often, until reduced by one fourth, watching carefully. Stir in the oysters, Worcestershire, Tabasco, and season well with salt and pepper to taste. Turn off the heat.

3. Divide the oysters among the shells or pour into the prepared baking dish. Wipe out the skillet and add remaining butter. Melt over medium low heat, add the remaining crumbs, and toss until coated. Sprinkle the crumbs over the oysters and bake until bubbly, about 10 minutes.

I am intrigued by this recipe, and I don't even like oysters. But I know my hubby would be over the moon. It really seems like such a simple recipe. I think I'll surprise him at Christmas. I do tend to stay with the old traditional family recipes at Thanksgiving, I think primarily because my 85 year old daddy still expects it. But one year my mother in law, who was an old Savannah gal, brought oyster dressing to our North Georgia Thanksgiving meal. Unfortunately it did not go over very well. I'm not sure if the dressing was just that bad, or if it was indeed the oysters. I could not bring myself to give it a try. But, thank you for this oyster recipe. I believe I'll surprise my husband with it, then ask him for that new living room furniture. :)

Sometimes experimental menus can really go awry at Thanksgiving. I didn't mention the year that the oven blew up with the Turkey Molé in it. You really should try oysters, Rebecca . . . they're wonderful. Especially in this recipe!

I had Lucy Mama's Oysters on Thanksgiving Day this year and was eating oysters for the first time in my entire life, and still can't believe how much I enjoyed this recipe and what a wonderful beginning it adds to the thanksgiving meal.

Dear Louise! Thank you so much for your kind words! It was such a pleasure sharing Thanksgiving dinner with you this year!

Hi Damon! I grew up on these because of my Mom's friendship with Ruth. A few years ago I brought them to a friend's Thanksgiving dinner here on the West Coast, and now they are strongly requested every year. Going out for ingredients tomorrow.

Gillian! How nice to hear from Rita's family! One of the great joys of my life was the one Thanksgiving that I got to cook with her at Ruth's. It was one of the culinary highlights of my life. Ruth even trusted me to make a batch of Lucy-Mama's oysters! But the best part was the time sharing and laughing in the kitchen with Rita and Miss Ruby!

Hi Damon! I made Oyster pie for a pre-Thanksgiving gathering yesterday, on the 5th anniversary of your post. I've adjusted the recipe for non-Dairy, using butter substitute and coconut cream instead of Heavy cream. It was a hit as always among the group, and took my back to those days in Housatonic.

I wish you a happy Holiday!

Thank you, Gillian! It was so good to hear from you! I really miss your mother and Ruth so much and this time of year I'm always aching to go see them. This year we're celebrating my Dad's 90th birthday (it's actually on Thanksgiving Day) but I'll be in Housatonic in my heart.