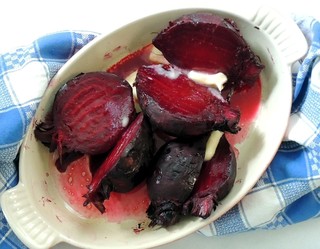 “Beets have a finer flavor baked than boiled; it requires longer time to cook them this way.”

Here’s an odd and suggestive historical puzzle: many nineteenth century American cookbook authors agreed with Mrs. Hill, conceding that beets taste best when they are baked whole rather than boiled. And yet, not one of them, Mrs. Hill included, provided directions for doing it. All of them kept right on giving the same recipe—that is, boil them whole, then trim, skin, and dress with butter and salt. If the beets were older and no longer particularly sweet, they suggested adding a little sugar and/or vinegar.

While there’s nothing wrong with the method, so long as the vegetables aren’t overcooked and are promptly drained and dressed, it’s true that all roots, beets in particular, are at their best baked or braised in butter (which is, for all intents and purposes, a form of stove-top baking). It’s odd, then, that even given the caveat that it took longer, they all neglected to provide the method.

To find how it would have been done in Mrs. Hill’s kitchen, we must look to her recipe for baking sweet potatoes, which were trimmed and nestled in a covered Dutch oven with a little water to keep them moist. The pot was set over hot coals, with more coals were piled on its rimmed lid. If the kitchen was provided with the luxury of a brick bread or stew-stove oven, the baking was done in an open pan, again with a little water added to keep them moist.

It’s a short trip from that to the current fashion for “roasting” vegetables. As Mrs. Hill would point out, we don’t really roast anymore; we bake at a high temperature. True roasting is a dry-heat process that in her day was done on a spit before a hot fire or on the hearth in a blanket of hot ashes. Because an oven is a closed chamber, what we do nowadays is an improvised imitation of roasting: while the high temperature keeps the ambient moisture at a minimum, it doesn’t eliminate it altogether. It’s still baking.

But while our imitation roasting handsomely concentrates the vegetable’s juices and creates a deliciously caramelized outer surface, it changes the inner texture and really wasn’t quite what Mrs. Hill and her colleagues had in mind. And when the new beets are just coming in and are at their sweetest and juiciest, there is simply nothing to equal really baking them. You won’t get that caramelized surface, but what you will get is deliciously concentrated sweetness in vegetables that are still plump, firm, juicy, and fresh-tasting.

1. Position a rack in the center of the oven and preheat to 400° F. If the greens are still attached to the beets, cut them off, leaving a little of their stems attached. Set the greens aside to cook separately, as you would cook spinach or other leafy greens. Scrub the roots well under cold running water, pat dry, and trim the taproot but leave most of it attached. Do not peel them.

2. Choose a heavy-bottomed 4-quart Dutch oven, preferably made of cast iron, and rub the bottom with a little butter, then rub each beet with butter. Put them in the prepared oven and add enough water to cover the bottom of the pot by ¼ inch. Cover and bake, turning the beets once or twice, until tender, about an hour. They will yield slightly when pressed with your finger and a knife inserted into them should go in easily, but they should still be quite firm.

3. To serve them as Mrs. Hill would have approved, let them cool just enough to handle and trim off the remaining stem and root ends. You can also slip off the skins if you like (wearing gloves to protect your hands from the staining juice), but it isn’t necessary. For my part, I just pile them in a serving dish and let each diner do the trimming. If served hot, pass more butter, salt, and, if liked, freshly ground black pepper along with them. Or if you like, let them cool completely, trim and dice or slice them, then dress them with vinaigrette just before serving.

Easier and less fussy, this method is even better at holding the moisture in the root.

1. Position a rack in the upper third of the oven and preheat to 400° F. If the greens are still attached to the beets, cut them off, leaving a little of their stems attached. Set the greens aside to cook separately, as you would cook spinach or other leafy greens. Scrub the roots well under cold running water, pat dry, and trim the taproot but leave most of it attached. Do not peel them.

2. Rub each beet with a little butter and wrap each individually in foil. Put them on a rimmed baking sheet or pan, and bake in the upper third of the oven, turning occasionally, until tender, about 1 hour. They will yield slightly when pressed with your finger but will still be quite firm.

3. Unwrap them and serve them hot or cold as for the traditional method given above.

I've moved from the South, but am taking this delicious recipe (Modern version) with me! Always delicious.