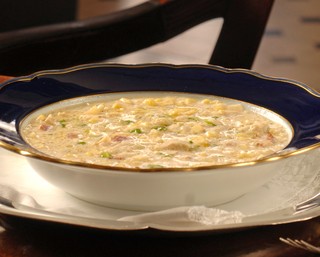 Savannah Chicken and Corn Chowder, photographed in the dining room of the Historic Green-Meldrim House by John Carrington Photography

A lovely compensations for the intense, wet heat that settles over Savannah each summer like a warm wet blanket, is fresh sweet corn. And a popular, if a bit ironic, way of having that corn is in chowder, a rich yet simple soup that has been a fixture in Savannah for at least a century.

Recipes for it have been turning up in community cookbooks since the end of the nineteenth century, and its variations are legion. In summer, during the height of corn season it’s sometimes made with shrimp or crab—either in addition to, or instead of, the chicken, but it’s also a popular cold weather supper when made with frozen corn and small, briny-sweet local oysters.

Many Savannahians buy extra Silver Queen corn while it’s in season and brave the heat to put it up in the freezer just to so they can have a little bit of summer sunshine in the dead of winter.

But don’t let a little heat make you miss out on having it now, while the corn is fresh from the garden.

Savannah Chicken and Corn Chowder
Serves 6 as a first course, 4 as a main dish

1. Shuck, silk, and wash the corn. Cut enough kernels from the cob to make 3 cups.

2. Sauté the bacon in a heavy-bottomed 4-quart pot over medium heat until it is golden brown and its fat is rendered. Add the onion and celery, and sauté until translucent and softened but not colored, about 5 minutes. Add the broth, and the corn. Bring it to a simmer and cook, stirring often, until the vegetables are tender, about 10 minutes. Add the milk and season well with salt, pepper, cayenne, and nutmeg. Let it come back to a simmer.

3. Add the cream, breadcrumbs, and chicken and simmer, stirring often, until the crumbs dissolve completely and the chowder is thick, about 10 minutes more. Taste and adjust the seasonings, ladle into warmed bowls, and sprinkle with green onions and parsley.

A nice and popular variation is Seafood Corn Chowder: You can just add shrimp and picked lump crabmeat to the soup as is, or substitute shellfish broth for the chicken broth and 8 ounces (1 tightly packed cup) of picked crabmeat and 2 dozen small peeled and deveined shrimp for the chicken meat. Some cooks also add a cup of our small but big-flavored local oysters.

Adapted from The Savannah Cookbook, copyright © 2008 by Damon Lee Fowler, all rights reserved.

When this recipe appeared in the Savannah Morning News a few years ago, I cut it out and tried it. Wow! It is one of my favorites! Now that I have returned to my hometown in Maryland, I have treated many friends and family members to it. It always a hit and I am always asked for the recipe. Thanks for sharing it!