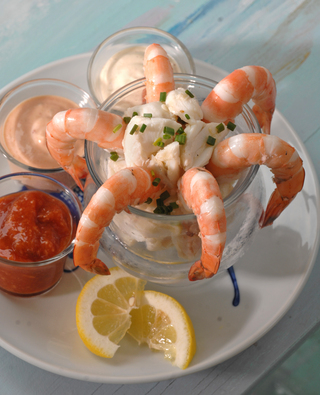 Labor Day weekend is traditionally summer’s last hurrah for most Americans, even though the season won’t officially end until the autumnal equinox later in September, and, in the Deep South, won’t be effectively over until well into October. But never mind about the calendar and heat index: Summer’s waning, whether actual or merely symbolic, is as good an excuse as any for one more outdoor party.

And here in the Lowcountry, there’s nothing more appropriate to open that party than one of the great, yet under-appreciated gems of American gastronomy, an ice cold, stirringly-spicy seafood cocktail. The history of these lovely concoctions is lost in time, buried under dozens of silly and even downright ridiculous “authoritative” stories, including one asserting that the shrimp cocktail was born in a Boston bar in 1941 and was originally loaded with vodka.

Honestly: where do they come up with this stuff?

Without getting into the careless convolutions of pop-culture mythology that all too often pass for “historical fact” (when there’s neither real history nor fact involved), seafood cocktails were, at least down here in the South, old hat by 1928. That’s when Mrs. Dull devoted an entire chapter in her landmark book Southern Cooking to “Cocktails”, opening with these suggestive remarks:

“Cocktail, both word and mixture, is purely American—an appetizer. At one time it was made almost entirely of liquors. Today it is made with fruits, vegetables, and fish. A good cocktail is usually seasoned very highly with seasonings belonging to the nature of the material used.”

She followed those words with a spicy cocktail sauce that was a blend of ketchup, lemon juice, Worcestershire, and hot sauce, and gave separate directions for using it to make cocktails of crab, oyster, and shrimp. Mrs. Dull didn’t mention the grated horseradish that is today a defining element of cocktail sauce, but many of her contemporaries, like Mary Moore Bremer (New Orleans Recipes), added liberal doses of the stuff.

Possibly because the sauce was often badly made and the seafood it accompanied was either indifferently prepared, old, or doomed by a prolonged stay in the refrigerator, seafood cocktails fell out of favor during the “gourmet” movement that marked the end of the twentieth century. Though they’ve made a bit of a comeback in the last few years, what goes by the name is all too often “nouvelled” beyond recognition.

Here in Savannah, where the word “change” is more frowned upon than the most vulgar of expletives, seafood cocktails have fortunately never gone out of fashion. Nor, even better, have they been subjected to “reinvention.”

At friend Bonnie Gaster’s house on Tybee Island, they’re the centerpiece for all her parties during shrimp and crab season. She doesn’t over-think presentation or bother with individual portions, but simply puts out a big bowl of perfectly poached, ice-cold inlet shrimp with a bowl of red cocktail sauce, a large platter of freshly picked lump crabmeat drizzled with a little of both her white and red cocktail sauces, and baskets of saltine crackers.

Here’s the slightly gussied up version she does for sit-down dinners.

1. Bring 4 quarts of water to a rolling boil over high heat. Add the shrimp, cover, and count 1 minute. Lift the lid and check the shrimp: as soon as they are curled and pink, they’re done. Lift them from the pot with a frying skimmer, allowing all the water to drain back into the pot. Rinse under cold running water, head, and peel them. (You can use the cooking liquid, heads, and shells to make shellfish stock.) Season the shrimp with salt to taste, toss well, and let cool completely. Cover and chill thoroughly.

2. Chill 6 stemmed cocktail glasses or footed compotes. When ready to serve, put the glasses on salad plates. Divide the sauces among individual 2-ounce sauce cups, then divide the cups and the lemon wedges among the salad plates. Spoon the chilled crabmeat into the center of the cocktail glasses. Sprinkle it with chives, and hang 6 shrimp around the rim of each glass. Serve immediately.

Here in Savannah, this is also used as a relish for fried fish and shellfish and dipping sauce for French fries.

1. Stir together the ketchup, horseradish, and lemon juice. Add several dashes of hot sauce, to taste and the pepper. Stir well and let stand 30 minutes.

2. Taste and adjust the seasonings and chill at least 1 hour before serving.

1. Thoroughly mix together the sour cream, lemon juice, and mustard. Fold in the mayonnaise, using ¾ cup if using dry mustard, ½ cup if using prepared mustard, and the pepper.

2. Let the sauce sit for at least ½ hour before serving.

The invention of this zesty dipping sauce was entirely accidental. After an impromptu party, Bonnie dumped together the leftover cocktail sauces because there wasn’t any room left in her crowded fridge to store them in separate containers. It was so good that now she does it on purpose. To the recipe for White Crab Cocktail Sauce, add 1 recipe of prepared Savannah Seafood Cocktail Sauce or ¾ cup chili sauce, 3 tablespoons of prepared horseradish and the juice of half a lemon.