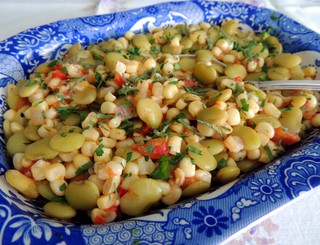 Classic Succotash with fresh butterbeans, corn, tomatoes, and herbs
Succotash is a true American classic and arguably one of the greatest vegetable dishes in all of American cookery. Though what we know by the name today mostly likely bears very little resemblance to the original, this mélange of corn and beans originated in Pre-Colombian America, and still carries its Native American name.

Unfortunately, it is nowadays sadly under-appreciated, in part because of what it has suffered in the hands of the canning industry and in part by what has been done to it by indifferent cafeteria cooks. Probably the nicest image that most of us could conjure from the word is a lisping cartoon cat that’s up to no good with the canary. And it’s too bad, for when well made, there’s no vegetable combination that is more delightful or satisfying.

Exactly how the original was cooked (and, indeed, whether it was cooked at all) is completely lost in time. Over the centuries, other cultures have touched the pot, leaving the imprint of Northern Europe in salt-cured pork and herbs, and of West Africa in onions, garlic, and probably both hot peppers and tomatoes which, while indigenous to our Hemisphere, probably found their way into the pot by way of African cooks.

The whole point of this dish is its perfect balance of fresh beans, corn, and—if they’re included—tomatoes, so get the best and freshest that can be had and take the extra it takes to prepare them. Besides, one of the secrets to its fine flavor is to include one of the stripped corncobs in the pot.

1. Shuck the corn, rub away any remaining silk with a vegetable brush, and cut the kernels from the cob. You’ll have about 2 cups sweet white corn. Reserve one of the cobs and break it into 2-3 pieces. Blanch, core, and peel the tomatoes. Over a wire sieve set in a bowl to catch the juices, cut the tomatoes in half and scoop the seeds. Roughly chop and add them to the collected juices.

2. Warm the drippings and onion in a large sauté pan or lidded skillet over medium high heat. Sauté, tossing often, until golden, about 5 to 7 minutes. Add the garlic and toss until fragrant, half a minute longer. Add the tomatoes and their juices, the broth, and ham and bring to a boil.

3. Add the butterbeans, the reserved cob, whole pepper pod, sage, and a liberal grinding of black pepper. Bring it back to a boil, then cover, reduce the heat to a simmer and cook 20 minutes, or until the butterbeans are almost tender but still a little underdone. If the liquid gets low, add water as needed to keep the beans barely covered.

4. Add the corn, raise the heat, and bring it back to a simmer, then cover, lower the heat, and gently simmer until the corn and beans are both tender, about 20 minutes more.

4. Taste and add salt if needed, then simmer for about 2 minutes to let it melt into the vegetables. Remove and discard the ham and hot pepper pod, turn it into a warm serving bowl, and serve hot. It can be made as much as a day ahead and reheated over medium low heat. Cover and simmer for 4 to 5 minutes after it begins bubbling.
1 Comments

Divine. I've been wanting a perfect Southern succotash recipe, and this fits the bill to a T. Thanks DLF.