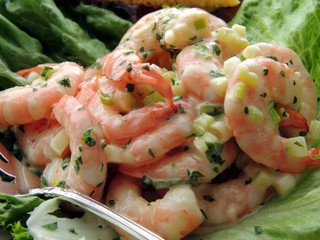 One of the great seaside dishes of summer in the Coastal South, whether that coast abuts the Atlantic or the Gulf of Mexico, is shrimp salad. It’s been commonplace in the South since the beginning of the twentieth century, but I’ve not found printed recipes for it that date back much further than the latter part of the nineteenth century. That said, the same basic recipe was used for fish and lobster salads as early as the 1830s and 40s, and along the coast, shrimp would almost certainly have been made into salad in the same way.

Those historical recipes were a simple triad of cooked shrimp, chopped celery, and homemade mayonnaise. That was it. And the basic recipe has changed very little: The most that sensible modern cooks add is a little onion. Making it, therefore, isn’t at all complicated. But like most simple things, doing it well requires a sense of balance, care with the details, and knowing when to leave well enough alone.

It should go without saying that the first detail to pay attention to is the quality of the shrimp. Too many people carelessly assume that it doesn’t matter what kind of shrimp you use when it’s “just” salad. There’s never a time when quality doesn’t matter, but in a salad, there’s nothing to cover up inferior shrimp, so it’s more and not less important.

They must be freshly caught, never frozen. And don’t even think about the canned shrimp that were often called for in many Victorian recipes. If you can get whole shrimp with their heads still attached, it’s added assurance that they’re fresher, and they’ll taste better when they’re cooked with the heads on. And when it comes to cooking them, know that “boiled” shrimp is not literal: they must cook quickly, but gently, and never actually boil.

The other main detail that requires care is the dressing. When you’ve gone to the trouble of getting the best shrimp, and have cooked them with care, why spoil them with indifferent mayonnaise? Regardless of those brand slogans, the best won’t come from a jar on a grocer’s shelf. You’re going to have to make yourself. Yes, it’ll take a little more time. Yes, it’ll be more perishable than store-bought, and yes, store-bought would be okay, but if you want that salad to shine, it’s worth going to the trouble.

Once you have those details in hand, and use good judgment with the mixing and final seasonings, the salad that you bring to your table will truly be something to remember.

As canned fish and shellfish became commonplace after the 1850s, in other parts of the country shrimp salad lost some of its regional identity and seasonal exclusivity, but here in the Carolina and Georgia Lowcountry and along the Gulf Coast, no self-respecting cook would have made it with canned shrimp, and it has remained a summer dish.

1. To make mayonnaise in a food processor, skip to step 3. To make it by hand, whisk the egg yolks in ceramic or glass bowl until thick and sticky, about a minute. Add the salt, lemon juice, vinegar and mustard and beat until smooth, about 30 seconds more. Whisk in the olive oil in droplets, whisking well between additions. It’ll be consistency of thick heavy cream. Continue with the other oil, whisking it in by tablespoonfuls and whisking well between additions, until it’s incorporated and the sauce is thick. Taste and adjust the lemon juice and salt, whisk well, and let it stand a few minutes before using or cover and refrigerate until needed. It’ll keep, covered and refrigerated, for a week. Skip to step 3.

2. To make mayonnaise in a food processor, put 1 whole egg, salt, and lemon juice, vinegar, and mustard in bowl of food processor fitted with steel blade and process 30 seconds. With the motor running, add the olive oil in steady trickle or through pinhole in pusher. Remove pusher and add remaining oil in a slow steady stream until the sauce is thick. Let stand a few minutes before using or cover and refrigerate for up to a week.

3. Bring 4 quarts water to a rolling boil in an 6-to-8-quart pot and prepare a large pitcher of ice water. When the water is boiling, carefully add the shrimp. Cover for 1 minute. Uncover, and as soon as the shrimp are curled and pink, and 3-4 of them float, immediately drain them into a colander set in the sink. Pour the ice water over them and toss to arrest the cooking. They’ll still be warm. Sprinkle them generously with salt, toss, and let them cool. If you’re using heads-on shrimp, snap off the head. Peel the tails.

4. To make the salad, cut larger shrimp into bite-sized pieces, but leave smaller shrimp whole. (If you’re using it as a sandwich spread, chop them.) Put them in a large glass or ceramic bowl, add the onion and celery, and toss to mix. Fold in ¼ cup of mayonnaise, then add more by tablespoonfuls until the shrimp are lightly coated. (You will need no more than ½-¾ cup). Taste and season with salt and cayenne, mix well, then cover and refrigerate 30 minutes. Taste and adjust the seasonings, and refrigerate it until needed.

5. To serve as a main dish, divide the lettuce among 4 plates, mound the salad onto them, and garnish with a sprinkling of paprika, parsley, and chives. If using it as a sandwich spread, omit the lettuce and paprika and mix the parsley and chives into the salad.

Delicious! The best way to use sweet Georgia shrimp.

Thank you, dear Edna! Miss you!