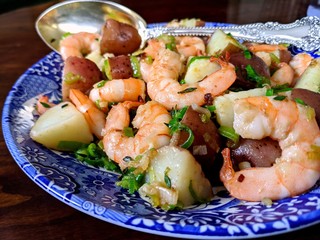 Over the course of my newspaper column's twenty year run, I but rarely developed original recipes for it. It wasn't laziness; it just wasn't cost effective. To fully develop a recipe from scratch requires a great deal of time and a lot more money than the column earned.

Still, every now and again, a column would inspire an idea for a dish that just wouldn't leave my imagination alone. And when, on those rare occasions, I gave in to the call and the recipe turned out well enough to make it into the column, it was always met with a hollow promise that I'd repeat it until it was perfected.

All too often, though, it got filed away and never made again.

Last year when panic hoarding created so many shortages of basic staples, just such an idea reared its little head and demanded to be noticed. Read More

Sounds so good. Thanks for sharing

Thank you! I hope you enjoy it!