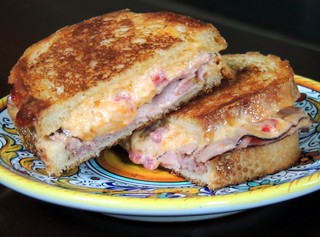 When griddle-toasted sandwiches became popular in the last century, it raised one of the oldest sandwiches known, thin-sliced ham and cheese tucked between thin slices of buttered bread, from classic to perfection. There’s nothing in all of cooking that can surpass that exquisite balance of crisp butter-toasted bread, warmed salty-sweet ham, and irresistibly gooey cheese.

Whether it’s the Croque Monsieur of Parisian bars, bistros, and street vendors, the egg-coated and griddled Monte Cristo (a kind of over-the-top French toast), Italy’s prosciutto and formaggio panini, or the simple, thin white-bread staple of nearly every drug store soda fountain in our country, even when the ham, cheese, and bread are only so-so, something about griddle-toasting them makes their union shine.

There’s even a uniquely Southern version, made with what has been called the “house pâté of the South,” pimiento cheese.

I have friends who will take me to task for even mentioning it, who think hot pimiento cheese an aberration. And I confess that when restaurants began carelessly slathering indifferent pimiento cheese on everything from grilled sandwiches and hamburgers to a dozen other hot dishes where it just plain didn’t belong, I was one of them. All too often, the results were not over-the-top wonderful but just plain silly and over-the-top nasty.

But almost every rule has an exception, and this sandwich is one of them. When the weather finally turns cool, there’s nothing like it for warming one up. Like all simple things, however, its success depends on the quality of its components. Yes, even though ordinary white bread, pressed ham, and store-bought pimiento cheese are transfigured when they’re toasted in butter, for the sandwich to be worth the trouble, you want all three to be the best you can get.

And when it comes to pimiento cheese, the best you’re going to get is the one you’ve made yourself.

My first grilled pimiento cheese experience happened back when my after-school and weekend job was in the soda fountain at City Pharmacy in Clover, South Carolina. The sandwiches came in ready-made and packaged, and needless to say the pimiento cheese was not stellar. Until, that is, one of my coworkers tossed one on the sandwich press and met my undisguised horror with a shrug and knowing “just try it.” That indifferent pimiento cheese almost sang.

But while grilling will lift an ordinary spread, pimiento cheese that’s heated really can’t be very loose or the whole thing just falls apart. My grandmother always worked part of the cheese into the mayonnaise so that it would hold together, and that’s the kind you want for this sandwich.

1. Let the pimiento cheese sit out at room temperature for 15-30 minutes to soften before using it. Spread one side of two of the slices of bread thickly with it, leaving a border about ¼-inch-wide on all sides. Top the pimiento cheese with the ham. Lightly spread one side of the remaining bread with mustard, if liked, or butter and put them over the ham, spread side down.

The recipe and some text are adapted from Ham: A Savor the South Cookbook® (UNC Press), copyright © 2017 by Damon Lee Fowler, all rights reserved.