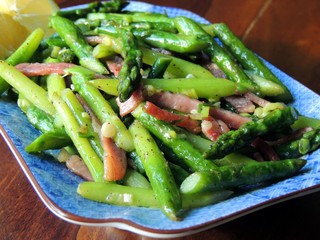 Most of us automatically associate stir-frying with the ancient cuisines of China and South-East Asia. But it’s actually a basic, almost universal technique (essentially the same as sautéing) that’s found in most of the world’s cuisines well beyond Asia, including France, Italy, and the Middle-East. Significantly, it’s a workhorse in melting-pot cultures like ours here in the Americas, where woks are often found in kitchens that have no apparent connection to Asia.

But while a wok is designed for stir-frying and does make the job easier, you don’t actually have to have one to stir-fry. Any pan that has curved or sloping sides will do.

This simple technique is perfect for asparagus. It brings out the flavor and, while there’s usually some prep-work to be done before the vegetable meets with the pan, once it does, the process is lightning quick, usually taking as little as two and rarely more than five minutes.

Stir-frying is less commonly used in traditional Southern cooking than it is today, but the classic French sauté has been part of our cookery from its inception, and the flavor combination here, asparagus, Southern dry-cured ham (country ham), scallions, and lemon go back hundreds of years. The recipe is adapted from my book, Ham: A Savor the South® Cookbook from UNC Press.

1. Trim and blanch the asparagus as follows: Trim the cut end of the stem, then peel the tough lower part of the stem with a vegetable peeler. Drop it in cold water and let it soak for a few minutes before cooking it.

2. Prepare a large basin of ice water. Bring 2-inches of water to a boil in a deep, lidded 12-to-14-inch skillet or wok over high heat. Add a small handful of salt and carefully slip in the asparagus, letting it fall into the water away from you. Cover and let the water come back to boil. Cook until bright green but not still firm, about 1-4 minutes, depending on the size and thickness of the stems. Immediately drain and drop it into the prepared ice water, stirring until cold. Drain well and pat dry. Cut it on the diagonal into 2-inch lengths.

3. Put the butter in a skillet or wok over medium heat. When it’s melted and hot, add the ham and toss until it loses its raw red color. Add the asparagus and stir-fry until beginning to brown, about 2 minutes. Season with pepper.

4. Add the scallions and toss until they’re bright green and the asparagus is done to your taste, about a minute longer. Taste, adjust the salt and pepper, and give it one last toss to allow the seasoning to melt in. Turn off the heat and serve at once with lemon wedges.

Recipe and some text adapted from Ham: A Savor the South® Cookbook. Copyright © 2017 by Damon Lee Fowler, all rights reserved.

(“Savor the South” is a registered trademark of the University of North Carolina Press.)