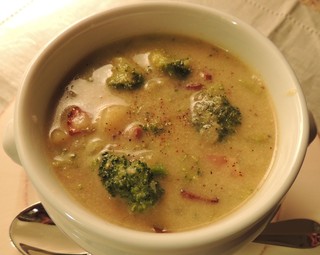 This morning, my office window looks out on an autumnal scene that seems like the beginning of perfect day for soup. Through the dwindling leaf canopy of the old pecan tree that dominates the view, the early sun occasionally peeks weakly through clouds that promise rain. There’s even a bit of frost on the window panes.

Unhappily, appearances, as they so often are here in Savannah, are deceiving: Those clouds are more like the ones that precede a summer storm than a cooling autumnal shower. The sunlight, when it does get through, doesn’t have that crisp clarity that speaks of dwindling temperatures and humidity. The pecan tree is dropping its leaves more out of exhaustion than anything. And that “frost” on the window glass is actually outside condensation from air that lies against the house like a hot wet blanket.

It would seem that the welcome taste of fall that we got at the beginning of the month was nothing but a tease.

Well, never mind: cool soup weather will be back soon. And when it does, this is one of my favorite ways to meet it.

I often think that the broccoli cheddar soups that have become inordinately popular on restaurant menus in our country are designed for people who don’t especially like broccoli and are not very particular about cheese. All too frequently they contain so much indifferent cheese that it completely takes over, literally smothering the taste of the vegetable.

Here, the broccoli is allowed to shine, enhanced by just enough bacon and potatoes to lend heartiness and substance. The only cheese is a bit of freshly-grated Parmigiano that each diner adds (or doesn’t) to suit his own taste.

1. Trim the cut end of the broccoli stems and wash well under cold running water. If it’s not as fresh and taut as you’d like, stand it in a bowl of cold water for 15-20 minutes, or until it is rehydrated and firm. Drain well. Using a vegetable peeler or sharp peeling knife, peel the stems until all the woody outer skin is removed. Cut the florets off the stem and cut the stems into small dice. Break or cut the florets into bite-sized pieces.

2. Sauté the diced bacon in a large, heavy-bottomed pot over medium heat until it is golden brown and its fat is rendered, but not crisp. Spoon off all but 2 tablespoons of the fat and add the onion. Sauté until it is golden, about 3-4 minutes.

3. Add the broccoli and sauté, tossing occasionally, until it is bright green, about 2 minutes, then add the potatoes and toss until they’re hot through, about 2 minutes more. Add the broth and season to taste with salt and pepper. Bring it to a boil, adjust the heat to maintain a steady simmer, and cook until potatoes begin to come apart when stirred, about 10 minutes.

4. Stir in the milk or milk and cream and raise the heat to bring it back to a simmer, stirring often and mashing a few of the potatoes against the sides of the pot to thicken it. Adjust the heat to a gentle simmer and cook, stirring often and again mashing some of the potato until the soup is thick enough to suit you, another 4-5 minutes. Taste and adjust the salt, season with pepper, and serve, if you like with Parmigiano passed separately.