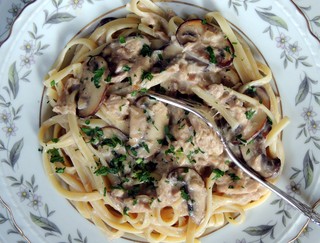 So much contemporary food writing, my own included, focuses on the importance of freshness: Using the best ingredients that our budgets will allow; taking the time and care to select the freshest, choicest things that we can find; using care in the way we store and use them. It would be nice if our cooking could always be like that. But more often than not, our day-to-day cooking is (or should be) more about not wasting what we’ve already got on hand.

Far too many people on this planet—no further away than our own neighborhoods—are hungry. No, using up that food instead of throwing it out isn’t helping those hungry people. But to squander still edible food just because it’s not at its absolute peak is self-indulgent and irresponsible. To my mind, our real challenge as cooks is bringing out the lingering potential in ingredients that may no longer be perfect.

This problem is often compounded by our American habit of once-a-week grocery shopping. We stock up and then are faced with fading produce and on-the-edge poultry before the week is out. Though time-consuming, the European system of shopping every day is a lot more efficient. But even the most frugal daily shoppers will often found ourselves with a few bits and pieces that we don’t want to let go to waste.

Last week, those leftover bits and pieces in my own kitchen were from making the Chicken à la King I wrote about—half a packet of mushrooms, half a small yellow onion, a few stray sprigs of parsley, a little broth and a little cream. A survey of the pantry turned up an open box of linguine with only a handful of noodles left in it and my usual stash of good tuna packed in olive oil.

It didn’t take a genius to realize that this litany of leftovers was an ingredients list for another of those fancy luncheon dishes: Creamed tuna over noodles.

It was not, perhaps, the most imaginative thing in the world, but sometimes we need to be reminded that we don’t have to treat the kitchen as if it’s a laboratory, where we have to conjure something startling and new every time we step into it. Sometimes, we do well to apply our efforts to doing what we already know, and to doing it to the best of our ability.

This is not, by any stretch of the imagination, Italian food, but it doesn’t hurt to apply an Italian sensibility to its preparation. Traditionally creamed tuna is served over something: toast, rice, or a bed of noodles. But if you take a moment to toss the noodles and sauce together before serving them, it’s a lot easier on everyone at the table.

1. Bring 3-4 quarts of water to a rolling boil in a 4-6 quart pot. Meanwhile, melt 4 tablespoons of butter in a deep, heavy-bottomed pan over medium heat. Add mushrooms and sauté until beginning to color and any liquid they weep out has evaporated, about 5 minutes. Add the onion and sauté until softened, about 3-4 minutes.

3. Fold in the tuna and season to taste with salt, white pepper, and nutmeg. Simmer, stirring occasionally, until the tuna is hot through. Stir in the sherry and turn off the heat.

4. Meanwhile, stir a handful of salt and the linguine into the boiling water and cook, stirring often, until al dente. Drain and immediately toss with the finished sauce. Divide it among two warmed soup plates and sprinkle with parsley.