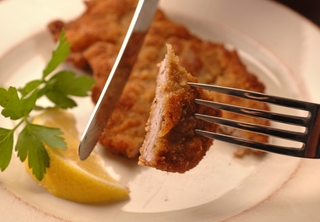 One of the great universal concepts in Western cookery is the breaded cutlet: a thin slice of meat, beaten thin both to make it uniform and to tenderize it, coated with dry bread crumbs, and fried to a delicate brown. Crackling crisp on the outside, tender and juicy inside, it’s arguably one of the most satisfying ways of giving flavor and panache to cheap and bland cuts of meat or poultry.

Cutlets are often credited by name to the cooks of Milan, and perhaps the idea did begin there, but a Costolette alla Milanese is classically made with bone-in veal chops and not the boneless round cut that are usually associated with cutlets in other countries. There are variations almost everywhere that we find stale bread for crumbs and cheap fat for frying, made with everything from veal to chicken, turkey, and pork.

Already ancient when Europeans began to colonize our continent, cutlets were a part of Southern cooking from the beginning and appeared in nearly every cookbook from Mary Randolph’s Virginia House-wife in 1824 through to Annabella Hill’s book the end of the antebellum period. In those days, veal was a lot less expensive than beef or poultry, and its mild flavor was even thought inferior; cutlets were a brilliant way of dressing it up. But by the third quarter of that century, breaded cutlets had mysteriously started to fade, replaced by croquettes of chopped meat or by dishes like Creole Grillades—veal round steak that was breaded and fried, but then stewed in a highly seasoned gravy.

After World War II, thanks mainly to changes in the dairy industry, veal suddenly became an expensive commodity, and fried cutlets were rarely found in Southern cookbooks except under an Italian name (or baked under a heavy blanket of sauce). They survived mainly in the professional kitchens of cafés operated by Greek-Americans or the rare neighborhood “trattoria” that was about as Italian as Queen Elizabeth.

By the time I was in college, they had sunk to so low that our cafeteria was passing off as fried cutlets a dry slab of ground veal and unidentifiable filler entombed in tough, tasteless, hard-fried crumbs. Indifferently blanketed with equally tasteless white cheese and topped, when the cooks thought of it, with a squirt of canned tomato sauce, they richly deserved their nickname, “dreaded veal cutlets.” It has been said that Southerners would eat shoe leather if it was fried, but shoe leather would’ve been a gourmet’s delight compared to that mess.

Fortunately, the delicately breaded and carefully fried cutlets of the old days did not completely disappear, and have made something of a comeback in Southern kitchens, thanks in part to a renewed interest in international cooking. However, since veal remains both wildly expensive and controversial, many cooks opt for boneless chicken or turkey breast. While both of those can be quite good, I actually prefer to use pork tenderloin for cutlets.

Like boneless chicken and turkey breasts and the corresponding cut of beef, pork tenderloins are the least flavorful part of the pig and can be as dull as they are convenient and popular. But when carefully done, this treatment draws out the flavor of the meat while keeping it juicy and tender.

One way to insure better flavor is to seek out tenderloins from “pastured” animals. (That may seem an odd designation for pigs, but “free-range” and “all-natural” have become meaningless terms in the food industry; “pastured” means that the animal has actually been allowed to roam freely and has not been raised on commercial feed.) Because pastured animals have more variety in their diets, their flavor, especially in the tenderloin, is more distinctive than commercially raised animals. Their tenderloins are also smaller than those from commercially raised pigs: a single one will usually feed no more than two to three persons.

1. Trim the tenderloins by first removing the excess fat with a sharp knife or sharp pair of kitchen scissors, and then pull away the fine film-like membrane that covers the muscle. On one side, you’ll find a wide strip of iridescent, stringy tissue (the silver skin) that connected the muscle to the bones. Remove this by slipping a sharp, thin knife just underneath it, then cut it away in strips. Many use a filet knife, but I like a hawk-beak-shaped “tourné” knife for the job.

2. Cut them crosswise into 1-inch-thick medallions. Lay them between two sheets of plastic wrap and beat them out until they’re uniformly just under ¼-inch thick. Sprinkle both sides with salt, pepper, lemon zest, and herbs.

3. Preheat the oven to 150-175° F. (or the warm setting). Fit a wire cooling rack into a rimmed sheet pan. Put enough butter and oil or clarified butter in a heavy-bottomed skillet to completely cover the bottom and put the pan over medium heat. When the fat is quite hot (the edge of a cutlet should sizzle on contact with it), raise the heat to medium high and put in enough cutlets to fill the pan without crowding. Fry until bottom is golden brown, about 3 minutes. Turn and brown them on the second side. Remove the from pan and lay them on the prepared cooling rack and keep them in the warm oven while remaining cutlets fry. Serve hot with lemon.

I believe the breading of foods originated in England. In French kitchens, breaded foods are typically called á l’anglaise (English-style)