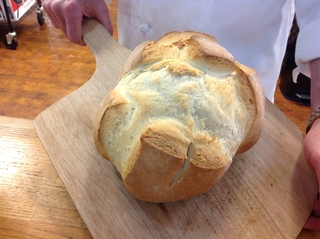 The Bread of our Forefathers, fresh from the Big Green Egg
When Kitchenware Outfitters, the kitchenware store where I have worked for the last six years, became a dealer for Big Green Egg, the ceramic outdoor cooker that was modeled on an ancient Asian technology, the historian in me was fascinated by the realization that these cookers performed much like another ancient technology: the open hearths and brick bread ovens of our ancestors here in the West.

Over the last year or so of working with the store’s demonstration model, both in cooking classes and on weekend demonstration days, I’ve been mulling a series of lessons on how to use the Egg to reproduce the food that our founding fathers enjoyed from the open hearth kitchens of their day. Grilling over hardwood (what they knew as “broiling”) is the most obvious and direct, of course, but the thing that first captivated me was the resemblance that the Egg’s domed, ceramic lid had to the beehive shaped brick ovens of open hearth days. Those ovens were, and still are, the best in the world for bread. And with very little adaptation, the Egg imitates them perfectly.

But first, it’s useful to know what the bread was like:

When you find the barrel of flour a good one, empty it into a chest or box made for the purpose, with a lid that will shut close; it keeps much better in this manner than when packed in a barrel, and even improves by lying lightly; sift the quantity you intend to make up, put into a bowl three quarters of a pint of cold water to each quart of flour, with a large spoonful of yeast, and a little salt, to every quart; stir into it just as much of the flour as will make a thin batter, put half the remaining flour in the bottom of a tin kettle, pour the batter on it, and cover it with the other half; stop it close, and set it where it can have a moderate degree of warmth. When it has risen well, turn it into a bowl, work in the dry flour and knead it some minutes, return it into the kettle, stop it, and give it moderate heat. In the morning, work it a little, make it into rolls, and bake it. In the winter, make the bread at three o’clock, and it will be ready before bed time. In summer, make it up at five o’clock. A quart of flour should weigh just one pound and a quarter.”

What Mrs. Randolph describes here had been the daily bread (at least of the gentry) for more than a thousand years—a bread that, unfortunately, was all but lost by the end of that century. She baked it, as bakers had done since antiquity, in the brick oven, which Annabella Hill tells us how to make ready:

“To Know when the Oven or Stove is Hot Enough for Baking.—Sprinkle in a little flour; if it turns slowly a good brown color, the oven is right; if it burns immediately, it is too hot . . . it will be right when you can hold your hand in to count twenty. But this is not a reliable rule, since some persons endure heat better than others. Baking may be done in the stove [by that she means the brick stew stove, which usually contained a drying oven], in a brick or iron oven; if a brick oven is used, kindle the fire when the dough is put on to rise; by the time the bread has risen, the oven will be ready; when the oven is hot enough, clean it out, and give the dust a few moments to settle before putting the bread in. . . Baking can only be learned by experience.”

Few of us are equipped with such luxuries today, but happily the Big Green Egg reproduces it almost perfectly.

First, make up the dough, following Mrs. Randolph’s time-honored formula. It’s useful to know that she used a soft-wheat flour, the kind preferred today for pastry-making, but a good quality all-purpose flour will answer. You’ll need:

Stir the water and yeast together in a ceramic bowl and let it proof for 10 minutes. Beat in a cup to a cup and a half of the flour to form a thin batter, called a “sponge.” Here is where I differ from Mrs. Randolph: leave this in the bowl and spoon all but a scant cup of the remaining flour over it. Sprinkle the salt over the top, cover with a damp, double-folded towel or plastic wrap, and let it rise until deep fissures form in the flour, with the sponge just beginning to bubble up through them.

Work the rest of the flour into the sponge, adding the reserved flour gradually until it forms a smooth, moderately soft but not sticky dough. If you use all the reserved flour, have a little more on hand for kneading. Sprinkle a wooden or plastic laminate work surface with a little flour and turn the dough out onto it. Knead it well until it is elastic, smooth, and springing back when pressed with your finger. Lightly flour it, wipe out the mixing bowl, and put the dough back into it. Cover once more with a double-folded damp towel and let it rise until doubled in volume.

When the dough is almost doubled, prepare the oven (that is, the Big Green Egg): ignite a bed of hardwood coals and when they’re hot, position the plate setter legs up and put the stainless grid over it, then lay the baking stone on the grid. Close the lid and open the vents top and bottom. Let the Egg gradually come to 500º F., then let it stay at that temperature for at least 20 minutes so that the walls and baking stone are fully up to temperature.

Meanwhile, flour the work surface again, turn the dough out onto it, and punch it down. Lightly knead it for a minute, then shape it into a neat ball. [Mrs. Randolph made it up into rolls—the ancient “Manchets” of Medieval Europe that were slashed in a circle so that they formed a top knot when baked, but when you’re new at this, it’s easier to manage a single loaf.] Dust a wooden baking peel with a little flour and then sprinkle it with coarse corn meal. Lay the dough on it.

Cover it with a damp towel and let it almost double again. When it and the Egg are ready, uncover the dough, and just before sliding it directly onto the baking stone, lightly and evenly slash the top in a tic-tac-toe pattern with a sharp knife, baker’s knife, or single-edge razor blade. [My slashes were a bit uneven and too deep on one side, which is why the bread’s last burst in the oven was uneven.] Slide the peel onto the stone and with a quick jerk remove it, depositing the dough on the stone. Quickly close the lid, open the vents, and bring the temperature back to 500 degrees. Let it bake 10 minutes, then adjust the vents to drop the temperature to 450 degrees. After another 10 minutes, drop it to 400 degrees. Check the bread after a minute or two, and if it’s browning too fast, let the temperature drop to 350. If it browns too quickly, the crust will get too brown and thick before the center is sufficiently done. Bake 10-15 minutes longer, until the bread is a beautiful golden brown and sounds hollow when you thump it on the bottom, or reaches an internal temperature of 200 to 210º F.

Remove the bread with the peel and transfer it to a cooling rack. Let it cool for at least 10-15 minutes before cutting it. If, that is, you can stand to wait.