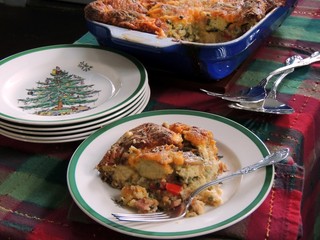 Christmas Strata with Ham and Mushrooms

Nowadays, unless we have friends drop by, there are just two of us here on Christmas morning: Our children and grandchildren live three states away; my parents and siblings are four hours away. And one of us is a church musician with a command performance at Christmas Day Mass. We rarely have the luxury of time and leisure for a breakfast like that.

And, to be completely honest, the last thing I want to do on Christmas morning is stand in the kitchen monitoring a grits pot, hot oven, and panful of sausage patties.

It was easy, then, to embrace the Christmas Strata, another Christmas breakfast tradition that, while foreign to my experience, had the appeal of being a whole lot less involved. In the highly unlikely event that you’ve been under a rock and have never encountered such a thing, a strata in culinary terms is just a savory bread pudding: stale bread layered with cheese, savory vegetables, and traditional breakfast meats like bacon, ham, or sausage, all bound with an egg custard.

What these concoctions have going for them (aside from being really good to eat) is that they can be assembled the night before, covered, and stowed in the refrigerator. The next morning, all the cook has to do is let it sit at room temperature while the oven preheats and then popped it in to bake. Morning is when these casseroles are most often served, particularly at the mid-winter holidays, but they also make lovely a supper dish for busy evenings during the season.

If you think on it, a strata is has a lot in common with the Christmas breakfast I grew up with—it’s just piled into one dish. So adopting it was almost as easy as popping it into the oven. Yes, there’s enough here for six to eight people, but even when it’s just the two of us, I’ll make the full recipe. The leftovers reheat nicely, which means at least two more meals that I won’t have to think about.

Adapted from my latest book Ham: A Savor the South Cookbook (UNC Press/© 2017 by DLF), this is a good base recipe to start from. Make it your own by adding a cup of cooked, seasonal vegetables to the layers, by substituting crumbled browned bulk sausage or cooked bacon, and/or by changing up the cheese and herbs.

1. Cut the bread into large dice (some cut enough for the top layer into decorative shapes with a cookie cutter). Butter a 9x13-inch casserole and put in half the bread.

2. Put the butter and peppers in a heavy-bottomed skillet over medium heat and sauté until they’re beginning to soften, about 2-3 minutes. Add the mushrooms and raise the heat to medium high. Sauté until they’re opaque, about 3 minutes, then add the green onions and ham and toss until hot, about a minute. Turn off the heat.

3. Scatter the ham, pepper, mushrooms, and green onions mixture over the bread in the casserole dish. Sprinkle with half of the oregano and season well with salt, pepper, and nutmeg. Sprinkle half of both cheeses evenly over it and top with the remaining bread.

4. Whisk together the eggs, milk, and remaining oregano, and season well with salt, pepper, and nutmeg. Pour this over the entire casserole, cover with plastic wrap, and let it sit until the bread has fully absorbed the custard, about 15-30 minutes, or refrigerate it overnight. Let it sit at room temperature for 30 minutes before baking.

5. Preheat the oven to 375° F. Uncover the strata and bake until it’s almost set, about 30-35 minutes. Sprinkle with the remaining cheese and bake until golden, about 20-25 minutes longer. Let the strata settle for 10 minutes before cutting and serving it.

Lovely to have a new recipe for Christmas morning, when my children and four grandchildren descend upon 503 E. President!