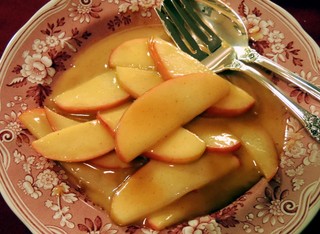 Our “pay” for singing was a dinner that, to Timothy’s disappointment, did not include dessert. When we got back to the house and had settled in at the kitchen table, Nathalie, who is a text book example of the maxim that Southerners are always talking about food, wanted to know all about where we’d eaten and what we’d had.

On learning that dessert was not a part of the package, knowing that a meal without dessert for Timothy just isn't a meal, she clicked her tongue and pronounced, “Well, that won’t do!”

Without another word, she reached for a couple of apples in the bowl at the center of the table and got up to rummage through a refrigerator that always looks as if it’s stocked for a hurricane. Or a siege.

In less than five minutes, the apples had been scrubbed, sliced, and a cast iron skillet holding a big lump of butter was sitting over a lively flame on the stove. As the butter began to sizzle, in went the apples and a sprinkling of sugar. When they were beginning to caramelize, she anointed them with a generous amount of heavy cream and let it bubble until it was a lovely warm tan. And very shortly, a big plateful of apples in buttery, creamy caramel was on the table and spoons were being passed.

“I took the caramel too far,” she complained . . . as we greedily scraped every drop of its perfection from the plate.

Since then, Nathalie’s caramel apples have become a quick fix in my own kitchen whenever Timothy complains that his sweet tooth is acting up. I’ve since added touches of my own—bourbon, of course, and because I always have a shaker of it by the stove, cinnamon sugar.

1. Scrub the apples under cold running water. If you like, or if the skins happen to be thick and tough, peel them (I rarely do). Stand an apple stem-side up on a cutting board. Cut off each side about ¼-to-½-inch from the stem. You’re cutting down either side of the core. Lay the resulting half-globe sides flat on the cutting board and thinly slice them, cutting straight down. Next, lay the center part with the core flat and cut through on either side of the core. Stand the resulting half-moon pieces up on the flat side that was next to the core and thinly slice them. Repeat with the remaining apple.

2. Melt the butter in a large heavy-bottomed skillet or sauté pan over medium-high heat. When it’s hot and the foaming subsides, add the sliced apples and sauté, tossing often, until they’re beginning to color. Sprinkle them generously with Cinnamon Sugar to taste and continue sautéing until the apples and sugar caramelize.

3. Leaning away from pan, add the bourbon, carefully ignite it, and cook, shaking constantly, until flames goes out. Add the cream, bring it to a boil, and cook until the cream is thick and lightly caramelized. Turn them out onto serving plates, garnish with a light sprinkle of cinnamon and serve immediately.

You can serve them as is, or put them over ice cream or toasted slices of pound cake.

Cinnamon Sugar: I keep a covered shaker of this sugar with my collection of oils and cooking condiments next to the stove year round, but this time of year is when I use it the most. For each cup of sugar allow 1 tablespoon ground cinnamon or more, to taste. Combine them in a bowl and whisk them together until evenly mixed, or put them in a jar with tight-fitting lid, cover, and shake until evenly mixed. Keeps indefinitely in airtight container.