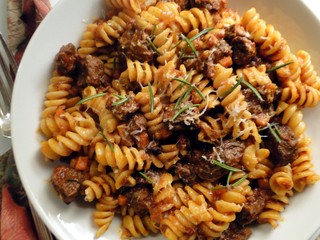 This morning, after days of midday temperatures that felt more June than November, Savannah finally awoke to clear, crisp air that had an actual a nip in it. Okay, it wasn’t exactly frosty, but it was cool enough to finally feel as if it was really fall—and to make the idea of cooking hearty things like pot roasts, thick stews, chili, and short ribs a welcome thing.

After finding some really nice grass-fed beef on sale this week, I stocked up, taking the promise of cooler weather on faith, but yesterday could wait no longer. Braving the lingering heat in my cramped, window-less kitchen (well, the only window is a small one over the sink that overlooks an enclosed porch), I rolled up my sleeves and made both a large batch of chili and a pot roast, little knowing that in less than twenty-four hours, the weather was going to be perfect for the job.

Well, at least now that temperatures are just right for eating such things, they’re ready.

But even as those pots simmered and I sweltered yesterday, my mind kept going back to this lovely dish of pasta sauced with a hearty ragù made from braised beef short ribs. It was still too warm to consider adding yet another pot to the mix, let alone more beef, but still: the promise of cooler weather was in the air, and, after all, it wasn’t really a stand-alone meat dish as the other two were, but only a sauce for pasta.

In the end, I knew it wasn’t practical, and put the idea of that ragù aside for another day. But this morning’s weather has stirred that craving up all over again, and now of course I’m contemplating a another trip to the butcher’s shop.

This handsome ragù actually began as a way of using up leftover braised short ribs. But it quickly became apparent that the flavors of that dish, while fine all by themselves, needed to be more robust if they were going to successfully mate with pasta. And by the time the final sauce was done, it was no longer a one-time way of repurposing leftovers, but a dish that was an end in itself, one that was certain to become a staple in my fall and winter cooking.

Because it really has to be made a day ahead, it’s a perfect weekend kitchen project.

1. You will need to begin the ragù a day ahead. Position a rack in the center of the oven and preheat it to 300° F. Wipe the ribs dry with paper towels and season with salt and pepper. Put the bacon in a large, heavy-bottomed flameproof casserole over medium high heat (if you’re using pancetta, add the oil now). Sauté, stirring often, until browned. Remove the bacon and drain it on paper towels.

2. Add the butter (and oil if you’ve used bacon) to the fat in the pan, and then add the ribs. Brown them well on all sides, in batches, if necessary, about 6-8 minutes. Remove them to a platter and spoon off all but 3 tablespoons of fat. Add the onion, carrot, and celery and sauté, tossing, until colored deep gold, about 5 minutes. Add the garlic and cook until fragrant, about half a minute more.

3. Return the ribs and bacon to the pan and turn them until warm again. Add the wine and vinegar, bring it to a boil, and add the tomatoes. Let it return to a simmer, cover tightly, and put the pot in the center of the oven. Oven braise until the ribs are fork tender, about 2½-3 hours, checking occasionally to make sure that the liquid is barely simmering, and adjusting the oven temperature as necessary.

4. Remove from the oven, uncover, and remove the ribs to a plate. If the juices are thin, put the pot over medium-high heat and let them reduce, stirring often to prevent scorching. Turn off the heat and let cool. Cover both the ribs and sauce and chill until the fat is congealed and the meat is cold to the bone.

5. When ready to finish and serve the Ragù, remove the sauce from the refrigerator. Remove and discard the congealed fat on the top and let it stand a few minutes. Meanwhile, remove the rib meat from the bones while still cold and cut it into dice. Add it to the sauce and slowly reheat it over medium-low heat and simmer gently until it is very thick.

6. Meanwhile, bring 4 quarts water to a rolling boil, add a small handful of salt, and let it return to a boil. When the sauce is ready, add the pasta and cook until al dente (the time will depend on the type of pasta). When it is ready, drain and add it to the sauce, tossing until it is uniformly coated. Add the cheese and toss well. Serve at once, sprinkled if liked with the minced herbs and with additional grated cheese passed separately.