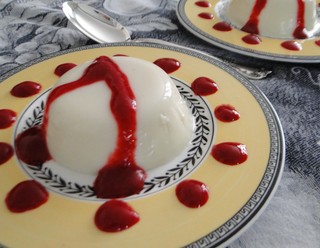 Why we set aside just one day to commemorate romance (and inadvertently bludgeon those who don’t have any in their lives), I do not know. But since we do, and many a lover will be trying to win (or at least please) the heart they crave by way of the stomach, here are a few thoughts on romance at the table on the Feast of St. Valentine. Read More

22 May 2011_History in the Hands of Clever Reporters

Tags: Thomas Jefferson, Julia Child, Mary Randolph, Historical Southern Cooking, mushrooms, Monticello, Classic French Cooking
One of the vagaries of having published a cookbook that involves a famous historical figure is that one will eventually have to talk to reporters about that figure.

Now, having worked as a journalist myself, let me quickly say that I have every respect for those whose job it is to pave our glutted information highway. Our society is inordinately curious about celebrity, down to the most tediously boring detail of their lives, and someone, I suppose, has to satisfy that curiosity.

Witness the recently published private correspondence between Julia Child and her friend Avis DeVoto, which has been my bedtime reading over the last few weeks. At best, about a quarter of these letters are interesting to cooks and culinary historians, chronicling as they do Child’s growth as a cook and teacher and the development of her masterpiece, Mastering the Art of French Cooking. The rest of it is, even for historians, about as interesting as watching paint peel.

Is what Mrs. Child thought of Joe McCarthy and J. Edgar Hoover really important? Not really, no. But because she was famous, someone thinks it ought to be.

Well, regardless of that, the historian who compiled and edited these letters at the very least maintained a healthy respect not only for both these women’s privacy but also for the truth. Unhappily, not all journalists take that much care.

For many of them, being clever, it seems, is more important than being factual.

Recently, because of my work as recipe developer for Dining at Monticello, a collection of essays and recipes that chronicle the food culture at Thomas Jefferson’s beloved home, I spoke on the subject at a nearby public library.

The following day, the local paper published an on-line video about the event that was introduced by a young woman who reported that Jefferson was not only a founding father and author of the Declaration of Independence, he was “also a very good cook.”

Clearly she did not hear my lecture, and subscribed to the time-honored Southern theory that facts should never be allowed to interfere with a good line.

Now, Jefferson was a lot of things, but he was no cook. Those were, in fact, just about the first words out of my mouth that evening. Yes, he’s an almost iconic figure in American culinary history, right up there with Mrs. Child, but unlike that lady, it is not because he mastered the art of French cooking—or, for that matter, any other kind.

He didn’t even know how to cook in theory, and never so much as lifted a pan, turned a spit, or cracked an egg. Jefferson was a gentleman farmer, and men like that simply didn’t do such things back then. Oh, to be sure, there were male cooks, even in the kitchen at Monticello, but he wasn’t one of them.

What set Jefferson apart for us was not his active participation but his catholic curiosity. While he was not the only man in his position to care about the quality of his table, he was the only one who cared enough to find out how a thing was done, and to copy out that how for those whose job it was to actually do it.

Unfortunately, he knew so little of actual culinary practice that he would often get the method hopelessly wrong. Luckily, his cousin (and daughter’s sister-in-law), Mary Randolph had a knowledge of cookery that went well beyond theoretical. She made sense out of Jefferson’s culinary scribbles in her lovely cookbook, The Virginia House-wife, published just two years before Jefferson died.

Were it not for Mrs. Randolph, my job translating the recipes that survive in Jefferson’s hand would have been a challenge. One can only imagine the hilarity with which that lady would have met our intrepid reporter’s pronouncement.

Well, what else could I do but follow Mrs. Randolph’s lead, laugh it off, and head back to the kitchen, where I happened to have some fresh, locally grown shiitake mushrooms and a pint of premium 40 % milkfat cream from a local organic dairy.

While it was not the season for the common field mushrooms that Mrs. Randolph used, nor are shiitake found in Virginia, even among the horticultural curiosities at Monticello, I still looked to her exquisitely simple recipe for inspiration.

Gather grown mushrooms, but such as are young enough to have red gills; cut off the part of the stem which grew in the earth, wash them carefully and take the skin from the top; put them into a stew-pan with some salt, but no water, stew them till tender, and thicken them with a spoonful of butter mixed with one of brown flour; red wine may be added, but the flavour of the mushroom is too delicious to require aid from any thing.

It was the perfect foil for misunderstood history, but it wasn’t, unfortunately, the perfect recipe for wood mushrooms like shiitake. In keeping with the spirit of her cooking, Jefferson’s fondness for French style, and perhaps because I’ve been reading about Julia Child, I instead got out a sauté pan and made

1. Clean the shiitake, cut off their tough stems and thickly slice them.
2. Put the shallot, butter, and olive oil in a sauté pan over medium heat and sauté, tossing often, until golden, about 5 minutes.
3. Raise the heat to medium high and add the shiitake, quickly tossing them so that they evenly absorb the butter. Like most mushrooms, they will immediately suck up the butter, but after they’re thoroughly heated, will release it once more into the pan. Sauté, tossing almost constantly, until they are wilted and coloring, about 4 minutes.
4. Splash in the cream and let it lightly thickened, about a minute more. Season liberally with salt and pepper, turn off the heat, and immediately pour them over the buttered toast. Read More
2 Comments

Having visited Monticello in my childhood, I remember that Mr. Jefferson devised some clever methods for getting food into the kitchen. Example: a pretty, landscaped fish pond was not stocked with koi, rather it was stocked with edible gamefish and conveniently located near the kitchen.

Form AND function was the Jeffersonian way.