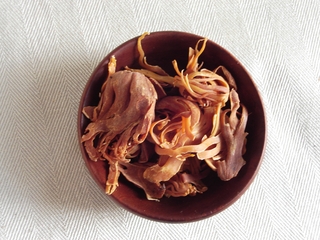 Whole mace. Bright orange-red when fresh, it dries to a softer rustier orange.

One of the most characteristic spices of eighteenth and nineteenth century English and American cookery is mace; ironically, it’s also one the most neglected in our kitchens today. Many Americans have never even heard of it, or think it’s something to spray in the face of a mugger or misbehaving date.

Originating in Indonesia, mace comes from the fruit of myristica fragrans or, more commonly, the nutmeg tree. Though the fruit itself is bitter and inedible, its kernel contains two of the most intoxicatingly powerful spices in the world. The fat, oval nut at its center is nutmeg, and mace is the leathery, bright orange-red netting that covers its hard shell.

The flavor and aroma of mace is more pungent and pronounced than that of nutmeg. Bitter and often peppery hot, it’s one of the essential spices for garam masala and can be found in many curry blends. But when judiciously mated with other things, it adds a surprisingly mellow richness that no other spice can match.

Though whole blades don’t hold their pungency as well as whole nutmegs, they still keep their oomph longer than ground mace. Unfortunately, the latter is just about all you’re likely to find unless are lucky enough to have an Indian market in the neighborhood. Whole mace is well worth seeking out, even if you have to mail order it.

Store mace in an airtight jar away from heat and light. When a recipe calls for a blade, use a whole shard about three-quarters of an inch long. When the ground spice is wanted, pulverize it as needed with a pestle (ideally of wood) in a stone or unglazed ceramic mortar.

Historically, whole blades were used much like a bay leaf in cream and milk based sauces, soups, stews, and fricassees. Ground mace could be found in both savory and sweet dishes and was once the characterizing spice for pound cake.

Mace adds a subtle richness to bechamel and old-fashioned cream-based sauces such as bread, onion, and oyster, and is a lovely mate for shellfish, veal, and poultry.

One handsome historical use for mace was in Turtle Bean Soup (see the recipe from 16 January). Another especially masterful one is this old fashioned conserve.

Drop one-and-a-half pounds of small shrimp into two quarts of rapidly boiling water. Cover, and count 1 minute. Uncover, and as soon as the shrimp are curled and pink, drain, rinse under cold running water, and let them cool enough to handle. Meanwhile, pulverize a blade or two of mace in a mortar and pestle. In a small saucepan over medium low heat, simmer two heaped tablespoons of minced shallots in an ounce of butter until softened. Turn off the heat.

Peel and roughly chop the shrimp. Put them in a stone or unglazed ceramic mortar or the bowl of a food processor. Add the mace, shallots, a large pinch of salt, and ground cayenne to taste. Some traditional recipes add a grating of nutmeg, too. Beat with a wooden pestle or process until finely ground then gradually beat in 4 ounces of softened butter. Taste and adjust the seasonings and mix them in.

Pack it into a crock leaving half an inch of headroom and cover it with a quarter of an inch of melted clarified butter. Cool, cover, and refrigerate until needed but let it soften to room temperature before serving. It should keep for up to two weeks until the butter seal is broken. Serve it with crisp toast points or plain crackers. Read More