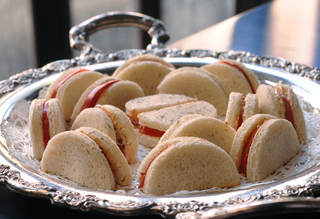 Bacon is the secret to Shirley's Tomato Sandwiches. Photograph by John Carrington
Before summer is over, let’s linger for a moment over one of the great, iconic tastes of the season: the tomato sandwich. For more than a century, this sandwich has been a seasonal standard and, while we Southerners love to claim it as our own, its popularity really knows no regional – or, indeed, continental – boundaries.

Whether they take the form of the South’s homey supper-over-the sink version, made with thick slabs of freshly gathered tomato on soft loaf bread slathered with homemade mayonnaise, the crust-trimmed elegance of Britain’s neat little tea sandwiches made with thin-sliced bread, carefully salted and pressed fruit, and butter, or the classic crisply toasted American diner standard, the BLT, tomato sandwiches are universally loved.

The sandwiches of my own childhood were the supper-over-the-sink kind. Made with juicy, thickly-sliced tomatoes from Mama’s garden, lots of mayonnaise, and the kind of mushy loaf bread that tended to disintegrate in your hands, the juice ran down one’s arms and squirted all over one’s chest. Eating them was, like sex, something one did in private.

It was here in Savannah, where tomato sandwiches have been the expected refreshment for any summer and autumn afternoon party or reception worth going to, that I first encountered the more refined English teatime form, the sort that (mostly) doesn’t squirt tomato juice and is easy to eat in one or at most two mouthfuls.

Among Savannah’s legendary caterers over the last century, arriving at The Ultimate Tomato Sandwich became almost like the pursuit of the Holy Grail. “Secret” ingredients ranged from two kinds of bread (one on each side), to onion mayonnaise, herb mayonnaise, and one of several brands of seasoned salt. They’ve all made their mark, but for me, the ultimate tomato sandwich was achieved by Shirley Cannon, former housekeeper for the Green-Meldrim House.

The historic Madison Square mansion is the parish hall for St. John’s Church, and the venue for an after-church coffee hour that’s like stepping back in time at least three-quarters of a century. The coffee and tea are dispensed from Victorian silver urns into china cups, and the lace-and-linen-draped tables are heavy with homemade baked goods and tea sandwiches.

Some of the food actually does change with the tide of fashion, but the centerpiece has not: it’s still Shirley’s tomato sandwiches, made by her incomparable recipe even though she has long since retired. Her secret ingredients were McCormick’s brand seasoning salt and crumbled bacon. Face it: nobody is going to top that any time soon.

First wash and core enough tomatoes to make thirty quarter-inch-thick slices. Slice and spread them on a platter or rimmed baking sheet (Shirley never peeled them), sprinkle lightly with kosher salt, and let them stand at least a quarter of an hour.

Meanwhile, cut the bread into rounds with a large round biscuit cutter. Mix the mayonnaise and bacon, and season to taste with the Seasoning Salt. Lightly spread one side of the bread rounds with bacon mayonnaise. Drain the tomatoes and pat them dry, then lay one slice each over the spread side of half the bread rounds, top with the remaining bread, spread-side-down, and cut them in half. You can make them as much as half an hour ahead. Cover them with a damp tea towel.

Just before serving, line twelve-inch round trays with lace doilies. Arrange the sandwiches on them in concentric circles, standing up on their flat cut sides. Sprinkle their edges with dill, and serve immediately. Read More
8 Comments

Lawd have mercy, this might make me convert to an Anglican!

Oh yum! Mr. Fowler. I didn't realize anyone even dared to mess with the traditional tomato sandwich, but this one looks and sounds like a real winner. Will make it tomorrow. Thanks!

So, so simple, but so, so delicious! You never cease to amaze me with your articles. Perfect southern delicacies. Keep up the good work!

Thanks, Damon... I truly love a good tomato sandwich.

I LOVE tomato sandwiches. I can't wait to try this recipe. I really enjoy your blog. Thanks for the great cookbooks and all the tips on the blogs....

I saw you on a Paula Deen show today and what intrigued by the term "food historian" since I love reading about social history. Your blog a lovely evocation of a part of the past that's worth evoking.