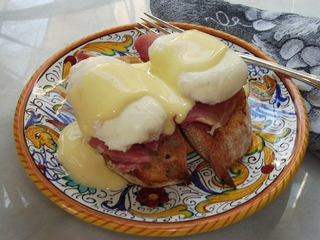 Sauce Hollandiase: Whether from the past or present, it doesn't need for the cook to be clever, just careful.

One of the biggest challenges for food historians is battling the arrogant notion that cooks of the past were more ignorant and naïve than we are today.

Perhaps it seems logical that the natural progression of knowledge in the kitchen is upward, with each succeeding generation learning from and expanding on the wisdom of the previous one. This would seem particularly true given the technological innovations that revolutionized kitchens in the last century and a half.

Sadly, the progression of knowledge has not always been vertical, and those innovations have done little to improve wisdom; in fact, there are many instances in which they’ve had the opposite impact and left us more ignorant and naïve than ever.

Worse yet, our present generation has had an unfortunate tendency to by-pass the knowledge of the past as a quaint inhibition to creativity. What this usually leads to is not true creativity, but a lot of time wasted either re-inventing something that already existed, or a kind of wanton culinary vandalism in which a perfectly good dish is spoiled by doing things to it that are just plain incompatible.

Modern cooking equipment will not improve such a cook’s knowledge or skill; it only takes away some of the time and effort that might have forced that cook to pay attention and actually think about what he is doing to the food.

While a food processor will make a passable mirepoix in a fraction of the time and effort required of a skilled hand and sharp knife, that mirepoix will never be as even nor react to heat in the same way as one that has been carefully diced by hand.

And while a blender will make an adequate Hollandaise without the cook turning a hand to a whisk or using any real judgment, it can never equal the fluffy, silken texture lent by a whisk in the skilled hand of a cook who is thinking and paying attention.

The least improved equipment of all is the oven of a modern range. A woman once bounced up to me at a book signing and, citing the range with its “reliable ovens,” said she thought cooking had just come into its own in the last fifty years. Sadly, she could not have been further from the truth.

To begin with, few modern range ovens can be called truly reliable. They’re more convenient, yes; we no longer have to constantly stoke the fire or know what kind of wood to feed it for the lively heat required for bread or the gentle one needed for custard.

When it comes to performance, however, a range oven is decidedly inferior to the brick and cast iron ovens of the past. To begin with, its thin steel walls almost guarantee uneven heat distribution because they simply can’t hold and radiate heat as brick and iron will. And while convection baking partly amends that problem, it still can’t match the perfectly even radiant heat from brick or iron.
To compound the problem, oven thermostats, which are only as reliable as their calibration, have made us all lazy: we’ve lost the ability to feel the heat and know when the oven is at the right temperature. When the calibration is off (and more often than not, it is), we’re left scratching our heads and scrambling for an oven thermometer.

The range’s only real improvement is the cooktop, which no longer needs the careful stoking and constant supervision of an open fire or wood stove. But while the range makes the job easier, we still need our ancestor’s knowledge of how to do it well if we want the results to be more than passable.

Obviously, I’m not suggesting that we abandon modern equipment, but we do need to be aware that we’re not smarter than our ancestors, and don’t in fact know more than a cook who could turn out the same meals that we do under conditions that were a lot more taxing. If we really want the progression of knowledge in our kitchens to be vertical, we have to go back and learn the lessons that they took for granted.

Though the prototypes of this sauce are Medieval, Hollandaise as we know it evolved in the early nineteenth century. Properly made, its base is a Sabayon (Zabaglione in Italian), which is really more of a technique than a fixed recipe. Early Hollandaise (also known as Dutch Sauce) was often flavored with a vinegar reduction rather than lemon juice, and in the English and American kitchens, where whisks were not as common, the Sabayon technique wasn’t used.

This recipe owes much to James Peterson, a modern cook who is very wise indeed.

1. Melt the butter over medium low heat, then turn off the heat but keep it warm.

2. Off the heat, whisk the eggs and water in a heavy-bottomed saucepan until frothy, then put the pan over medium heat. Whisk until it has tripled in volume and thickened, about 2 minutes. Remove it from the heat and continue whisking for about half a minute.

3. Gently whisk in the warm butter a little at a time, then gradually whisk in the lemon juice, tasting as you go: you may not need all of it; the lemon flavor should be subtle. Season to taste with salt and cayenne or white pepper and serve as soon as possible. Read More