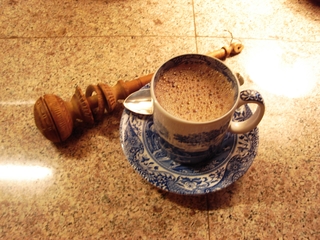 Drinking Chocolate, shown with a Mexican chocolate mill. The froth here was made with a standard baloon whisk.

Regardless of what one thinks of confining the celebration of romance to one day in the year, there’s something to be said for a holiday so deeply associated with chocolate that the connection is almost taken for granted.

That has not always been the case: until the middle of the nineteenth century, chocolate was rare and expensive, and the lavish bonbons, cakes, mousses, and pots de crème that tempt lovers nowadays didn’t exist. Chocolate was almost exclusively used as a beverage and, moreover, was a luxury that few could afford. In short, only the most elite lovers could conjure with chocolate, and they had to do so with a cup.

They could have done worse. Drinking chocolate goes back at least to the ancient Mayans, who used it in religious rituals and may well have believed it to have had aphrodisiacal powers. The Europeans, upon discovering it, certainly did. But then, they thought almost everything from the New World was an aphrodisiac.

Never mind. Silky rich drinking chocolate has a power all its own—and isn’t the biggest part of romance in our heads anyway?


By the days of the early Republic, drinking chocolate was still a luxury, but had become affordable enough to be well established in America. It was made in some variation of the method put down by Lettice Bryan in 1839.

Chocolate cakes are carved in little squares on one side, to each of which, if the chocolate is good, allow about three jills* of water. Scrape it very fine with a knife, mix it with just enough boiling water to dissolve it, mashing it with a spoon till smooth, and then put it in a block-tin boiler, mix in the remaining water, which must also be boiling, cover it, set it on a trivet over a bed of coals, and boil it gently till reduce to about two thirds its original, giving it a light stirring two or three times: then replenish it with cream or rich sweet milk, making the boiler as full as it first was with water; watch it closely, stirring it a little till it boils up; then take it instantly from the fire, or it will boil over the top and a good part of it will be lost. Whirl round in it, near the top, a chocolate mill, (or a small bunch of bended wires will answer) till you raise a rich froth on the top, and send it to table hot, accompanied with chocolate cakes**, dry toasts, or hard rusks.

** These were crisp sugar cookies designed for eating with the beverage. They didn’t contain chocolate.

With all respect to Mrs. Bryan, Miss Eliza Acton, one of the finest cookery writers of nineteenth century England (or, for that matter, anywhere else) provided a more refined recipe in her 1845 masterpiece that set a new standard for cookbooks.

An ounce of chocolate, if good, will be sufficient for one person. Rasp, and then boil it from five to ten minutes with about four tablespoonfuls* of water; when it is extremely smooth add nearly a pint of new milk, give it another boil, stir it well, or mill it, and serve it directly. For water-chocolate use three-quarters of a pint of water instead of milk, and send rich hot cream to table with it. The taste must decide whether it shall be made thicker or thinner.

* Miss Acton means a common table or kitchen spoon roughly double the size of the standard modern measuring spoon. The closer equivalent to our tablespoon was a dessertspoon. Notice that while she says an ounce of chocolate will be sufficient for one person, the amounts given in the ingredient list and within the recipe are for two servings.

Very little of Miss Acton’s method needs further illumination for modern cooks. By milling she meant to whip it with a chocolate mill, a round whip on a long handle that was spun by rubbing it between the hands. Her recipe was accompanied by a drawing of a chocolate pot that came equipped with such a mill.

To Make Chocolate for Two.

Finely grate two ounces of best quality unsweetened dark chocolate. Bring a scant half-cup of water to a simmer over medium low heat, stir in the chocolate, and keep stirring until it dissolves. Let it simmer slowly while you bring one-and-three-quarters cups of light cream (or a blend of whole milk and cream) almost to a boil in a separate pot. If liked, add a cinnamon stick or half a vanilla bean to the milk before heating it, and let it simmer for five minutes. Slowly whisk the hot milk into the chocolate, sweeten it to taste with sugar, and if you’ve not used cinnamon or whole bean vanilla, flavor it with a little homemade Bourbon Vanilla (see 26 October 2011). A tiny pinch of cayenne is considered good for increasing one’s romantic inclinations. Whisk or mill until there is a thick froth on top and serve immediately.

You will not have to wait long for results. Read More

I should note that chocolate candy was not completely unheard of. From E[liza] Smith's The Compleat Housewife (first published in London in 1727, and later in Williamsburg, Virginia, in 1742) comes this recipe for little chocolate lozenges:

Take a pound of chocolate finely grated, and a pound and a half of the best sugar finely sifted; then soak gum dragant in orange-flower water, and work them into what form you please; the past(e) must be stiff; dry them in a stove*."

* This means the drying shelf of a masonry stew-stove.