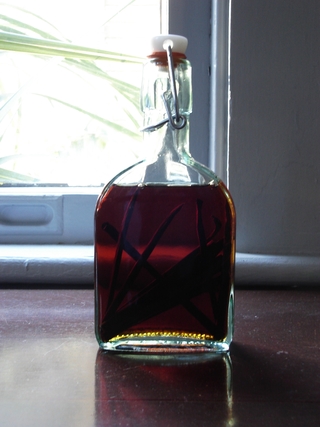 Homemade Mexican Vanilla Extract, ready to use after two weeks' steeping
Two weeks in, the Mexican vanilla has had it's daily shake and is now ready to rumble, just in time for the holiday drinking custard, creme anglaise, ice cream, and velvet-rich pound cake, among other things.

Notice how much the color has deepened. It will continue to get richer and darker as it ages.

There's no need to decant the extract from the beans: in fact, one shouldn't; the extract can actually be replenished for a long by simply by adding bourbon in kind to replace what was taken out. When it seems to be weakening, just use it up and start a new batch. Read More
Be the first to comment 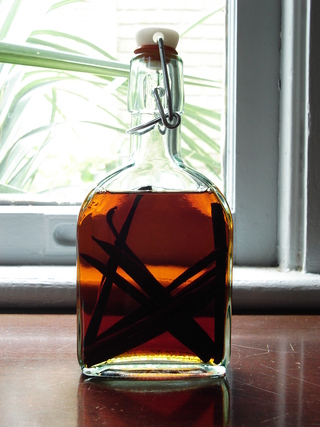 Bourbon Mexican Vanilla Extract, Day 3: the bourbon is now drinking in some of the vanilla's rich color and is several shades darker
The third day: the bottle has been kept in a cool, dark place, and has been shaken once daily. Already the color is deeper, richer, especially toward the bottom of the bottle. I won't open until it's ready to use, but the fragrance of the vanilla will already be conquering the sharp bite of the alcohol. Read More
Be the first to comment 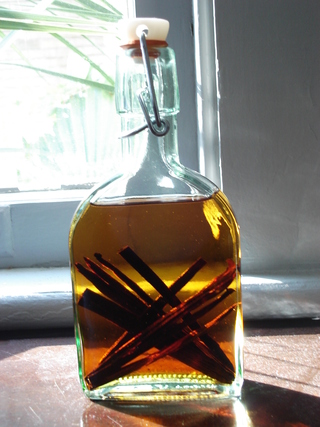 Bourbon Mexican Vanilla Extract, day one: the liquid is still pale and clear.
One of the most enduringly popular spices in the baker’s pantry is vanilla, the bean or seedpod of a variety subtropical orchid native to the Western hemisphere. So many of our sweets and baked goods contain it that it’s hard to imagine what the broad repertory of European and North American baking and desserts would be without it.

It may, in fact, have become a little too popular, thanks to the proliferation of cheap imitation flavorings, which have made vanilla so commonplace that the very word has become a synonym for bland, predictable and boring.

There is nothing bland or boring about real vanilla, and nothing that can equal its heady, fragrant magic. And while its imitations may be had for next to nothing, the real thing is still exotic and expensive.

However, a single bean can be made to go a very long way by infusing it into an extract. There are quality commercial extracts available, but making your own is very simple and gives a lot of satisfaction, not to mention flavor, that money can’t buy. All it takes is a couple of first quality vanilla beans, some decent bourbon, and a little patience.

Some people use vodka or brandy, but I prefer the mellowness that bourbon lends. The most fragrant proportion is one bean for every quarter cup of alcohol, about half the alcohol usually called for in these infusions. You simply split the bean lengthwise, halve it, put it into a clean glass jar and cover it with the prescribed amount of booze. Seal and give it a vigorous shake, then put it in a cool dark cupboard that you’ll be going into every day. For the first week or two, give it a shake every day.

Homemade extract lasts a lot longer because you leave the beans in the brew, replacing the extract as it is used with the same quantity of alcohol. It’ll last you for a couple of years at the least. Once the flavor starts to weaken, use it up and start a new batch.

Though I have full bottle of bourbon infused with excellent Madagascar vanilla beans, there’s another new batch infusing in my pantry, thanks to friend Colleen Crislip, who came home from her last trip to Mexico with one of the loveliest gifts imaginable: a slim glass tube containing three supple, fragrant Mexican vanilla beans. One of the most aromatic vanillas in the world, they haven’t always been available to us north of the Rio Grande. They make the most fragrant extract imaginable, rich with hints of coconut and chocolate.

The photograph was taken yesterday, just after the bourbon was poured over the beans. As it matures during the next couple of weeks, I’ll share its progress. Read More
4 Comments

Hey Damon! What kind of bourbon did you use?

Where can I buy the empty bottles?

You can find the bottles at kitchenware stores and even some hardware stores. You could also try the kitchenware/housewares department of stores like Target or K-Mart.