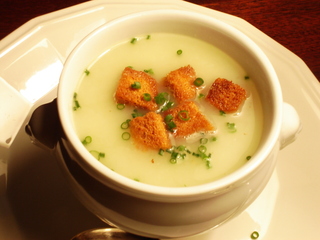 One of the benefits of observing a Lenten discipline at the table is the discipline it imposes on us as cooks in the kitchen. A Lenten table isn’t just about doing without: simpler food is not merely an exercise in restraint; it actually commands more from the cook, asking us to pay closer attention, to think more carefully about what we’re doing.

Simpler food, stripped of artifice and flavor-enriching fats, is more exposed, its flavors more direct. Simpler, understated preparations likewise leave the cook more exposed, with very little margin for error. The simpler the cooking is, the less the cook can afford to let his attention waver.

Nothing more fittingly illustrates the point than that old mainstay of the French kitchen, Potage Parmentier—or, as we know it, leek and potato soup. It’s the perfect dish for a Lenten table, and once was very popular during the season; unhappily, it is nowadays sadly overlooked and neglected.

The classic soup is nothing more than its English name implies: fresh, young leeks and potatoes thinly sliced and simmered together—and that’s about all. There’s no broth and its only seasonings are a little onion and salt. The finished soup can be enhanced with a splash of cream, a handful of crisp croutons, a sprinkling of bright, freshly snipped chives, and sometimes a whisper of white pepper, but even those garnishes become superfluous when the soup has been well made from first rate ingredients. And if it hasn’t been, well, there’s not a garnish in the world that will make it palatable.

The leeks must be vibrant, fresh, and carefully handled—well cleaned without that misguided technique of slicing and then soaking it in ice water (which may take away the sand, but unhappily will take a good deal of the flavor along with it), thin-sliced, and slowly sweated in a little butter to draw out its flavors without caramelizing it.

The potatoes should likewise be selected with care—mature, but still firm, snapping crisp, and fresh tasting, then thinly sliced so that they cook quickly and evenly without taking on that heavy, almost sour aftertaste that overcooking can bring to them.

The onion, salt, and (if they’re even used) the garnishes play only a supporting role.

In short, Potage Parmentier is not a complicated dish nor do the techniques involved require any particular skill from the cook. But to be done well, it does require a good deal of thoughtfulness and finesse, and it never hurts to be reminded of that.

Though not classic, one of my own favorite variations for this soup is to save a couple of cups of the tender leek greens, stir them into the pureed soup, and gently simmer until they are barely tender. They lend both texture and a bright, fresh flavor.

1. To clean and prepare the leeks, lay them flat on a cutting board, slice off the root tendrils without removing the root base altogether, then, with the knife parallel to the board, carefully cut them in half lengthwise. Holding each half root-end-up under running water, fold back the leaves and wash away the sand and dirt that is caught between the leaves. Drain and thinly slice both the white and pale tender greens. You should have about 3 cups. Lay aside the other greens for the stock pot.

2. Warm the butter in a heavy-bottomed 3½-to-4-quart saucepan or Dutch oven over low heat. Add the leek and onion and let them sweat until softened and translucent, about 8-to-10 minutes. Add the potatoes, toss well, and let them heat through.

2. Add the water and raise the heat to medium high. Bring to a boil, adjust the heat to a simmer, and season with salt. Cook gently until the potatoes are tender, about 10 minutes. Puree in batches with a food mill, blender or food processor. (It can be made several days ahead up to this point: let cool, cover, and refrigerate.)

3. Return the soup to the pot and reheat it slowly over medium low heat, stirring often. Stir in cream to taste (if using), taste and adjust the seasonings, and heat for a minute to let the flavors meld. Serve garnished with a few croutons on each bowl, a sprinkling of chives or leek greens and, if liked, a light grinding of white pepper. You may also add another spoonful of cream to each bowl, or opt to use the cream only as a garnish.

Preheat the oven to 300 F. Put 2-3 tablespoons of butter (or olive oil) on a rimmed baking sheet and heat until it is just melted (or in the case of the oil, fragrant). Cut 2 cups of stale home-style bread into small cubes. Put them on the baking sheet and quickly toss to evenly coat them with fat. Bake, stirring occasionally, until the croutons are evenly golden and crisp, about 20 to 30 minutes. For soups, I prefer to use butter, but olive oil is better for salad croutons. Read More

You have turned Lent into delicious, Mr. Fowler, with a splash, sprinkling, and a whisper. Mrs. H