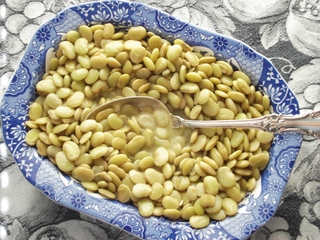 Annabella Hill's Buttery Butterbeans
One of the great inventions of the modern world has to be the machine that shells summer’s bounty of beans and peas—as anyone who has ever been subjected to the job as a child will readily tell you. There are few things in this life better than fresh butterbeans from the summer garden, and even fewer that are more tedious than shelling them.

Southern cooks of the past would no doubt turn their noses up at the neat bags of butterbeans that came home with me from the farmers’ market this morning. They’d argue, and rightly, that beans that had been lying bare-naked on ice could not be nearly as good as ones that were kept snugly in their pods until just before they’re cooked.

But those old girls had help in the kitchen—or at the very least, a child they could indenture for the job—and I don’t. The small sacrifice in flavor is well worth the wear and tear it saves on my fingers, not to mention patience.

Besides, the morning was hot and making me a little homesick, and those plump little butterbeans brought back soothing memories not only of home, but of my dear old friend Clara Eschmann, the endearing lady who was for many years food editor of the Macon Telegraph.

A fantastic cook and natural-born storyteller, Clara loved butterbeans almost more than she loved bourbon (which is saying a lot). She steadfastly maintained that no self-respecting Southerner would ever call them lima beans, and relished spinning the tale that their Southern name derived from the fact that they had to be cooked with butter—and plenty of it.

She was in good company. Witness Mrs. Hill’s directive on the subject, put down a good half-century before Clara was born:

360. Lima, or Butter Beans.—When fully formed, and before the hull turns yellow, shell them; wash them well, and put them to boil in hot water, sufficiently salted to season them. When tender, pour off nearly all the water; make the remainder of the broth rich with butter, and serve upon a hot dish. Never pepper them unless with white pepper; the small black particles of the common pepper upon so much white vegetable gives them an untidy appearance.

Mrs. Hill’s reputation as a cook could rest on that recipe alone. Say what you will about what salt-cured pork and pepper bring to other kinds of beans, these delicacies need absolutely nothing but salt, butter, and two hands that don’t mind one another—a stingy one with the salt and a generous one with the butter. Anything else just gets in the way.

To serve 4 people, you’ll need about a pound (shelled weight) of small fresh butterbeans—which works out to about 3 generous cups. You’ll also need a little kosher or sea salt and about 2 ounces (4 tablespoons) of best quality butter. Put the shelled beans in a colander, rinse them well under cold running water, and let them drain.

Bring a quart of water to a boil over medium heat, season it lightly with salt, and add the beans. Bring it back to a boil, skimming off the foam that forms, and reduce the heat. Simmer gently until the beans are tender, which could take anywhere from 15 to 25 minutes, depending on their size and maturity. Drain off most of the liquid and stir in the butter a few lumps at a time, until the liquid is lightly thickened and creamy. Taste and adjust the seasonings, adding more butter if they’re not creamy enough. Heat a serving bowl by rinsing it with hot water, turn the beans into it, and serve immediately.

You might think that such a recipe could barely be called cooking, but sometimes the mark of a real cook is knowing when to leave well enough alone. Read More
3 Comments

This whole thing just makes me hungry! I love veggies, but especially butter beans (good ones, cook right!). Love to read your postings....always interesting and informative!

Thank you, Diane. It's always good to know that someone's reading. Please share with your friends!

Mrs. Hill's recipe is quite similar to how my grandmother used to cook butterbeans - she would add the butter in the beginning. She would've also agreed with her directive, "sufficiently salted" and plenty of butter.