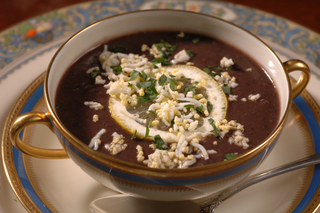 Across the lane from my office window (in Savannah, we do not have “alleys”), there are orange and gold turning leaves right next to a magnificent tulip magnolia in full bloom. In mid-January. Such rare mornings as have commanded a topcoat and scarf have more often than not dissolved into afternoons that are downright balmy, barely demanding a sweater. This is almost unheard of, even in our little seaside corner of Georgia.

Fortunately, despite such daytime extremes our evenings have been cool enough to stir a seasonal longing for warming, comfortable bowls of soup. And when comfort is required, is there anything that fills the bill quite so well as bean soup?

All bean soups, from the thick, pasta-studded zuppas of Tuscany to the fragrantly spicy mélanges of the Caribbean, speak of the region from whence they came, and Savannah’s own, made with black, or as they were colloquially known, “turtle” beans, was no exception.

Where most bean soups are robust and provincial, and eaten from coarse everyday pottery, this one was a subtly seasoned, velvet-smooth puree served in the best company china. Ranking second only to Turtle Soup for refined elegance (it even had the same garnish of wafer-thin sliced lemon, sieved egg, and minced parsley) it was the culinary answer to the graceful architecture that surrounds our celebrated squares.

Unhappily, modern Savannahians rarely encounter this lovely soup at all, let alone served in that gracious way. The black bean soup to be found in local cafés and on far too many family supper tables is a Cuban or Southwestern inspired concoction spiced up with chilies, cilantro, cumin, and enough garlic to ward off an entire family of vampires.

Now, there’s a lot to be said for a spicy dose of Caribbean or Southwestern sunshine on a cold, drizzly winter day. But when the soul needs both warmth and refinement, Old Savannah had the better medicine.

Sometimes the eggs were merely sliced and laid on the bottom of the tureen or soup plate before the soup was ladled in, imitating the way the turtle’s eggs were used in that soup, but for state occasions, they were forced through a wire mesh sieve and sprinkled over the top of each serving.

Serves 8 as a first course at dinner, or 6 as a main course at lunch or supper

1. Rinse the beans under cold running water, sort through and discard any damaged or discolored ones, and put them in a large, heavy bottomed pot. Add enough water to cover them by 2 inches. Beans cook better in soft water: if your water, like Savannah’s, is hard, use bottled or filtered water. Bring the beans slowly to a boil point over medium heat. Turn off the heat and soak until the beans have doubled in volume, about an hour.

2. Replenish the water with enough to cover the beans by 1 inch. Put the pot back over medium heat and bring it to a simmer again, skimming away any scum that rises. Reduce the heat to a slow simmer and cook until the beans are tender, about an hour.

3. Drain, reserving the cooking liquid, and return the beans to the pot with 2 cups of cooking liquid, the salt pork, and meat broth. Raise the heat to medium, and bring it back to a boil. Add the onion, garlic, carrot, turnip, celery, and tomato paste, let it return to a boil, skimming off any scum that rises, then put in the bay leaf and parsley, powdered cloves, a pinch or so of salt (going easy; you can correct it later), a liberal grinding of pepper, a small pinch of cayenne, and the catsup or Worcestershire. Reduce the heat to a slow simmer, cover, and cook until the vegetables are very tender, about 2 hours.

4. Puree the soup through a food mill or with a hand blender, regular blender, or food processor. If it’s too thick, thin it with some of the reserved bean cooking liquid. Return it to the pot and bring it back to a simmer over medium heat, stirring often to prevent scorching. Taste and adjust the seasonings, and let it heat 2 to 3 minutes longer.

5. Meanwhile, force the eggs through a coarse wire sieve. To serve, add a tablespoon of sherry to each bowl and ladle in the soup. Float a slice of lemon on top of each and sprinkle with egg and parsley. Serve at once, passing Pepper Sherry separately, if liked. Read More

This sounds like just the thing for a lazy weekend cook. Thanks Damon!

Thank you, Scott. It's just an old Savannah recipe, based on a couple of sources, including one from Juliette Gordon Lowe's mother, Nellie Gordon.

Sounds delicious! I am going to try.

Looks wonderful, and I have a lb. of black beans. How much mace would you use if you don't have blade of mace?

I'd use a bit of freshly grated nutmeg. Since mace is the delicate netting that covers the nutmeg "nut", it's in the same flavor family. If there's an Indian market near where you live, you might be able to get whole blade mace from them. Plum Pudding might also carry it.