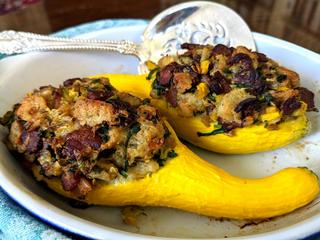 My mother is descended from generations of gardeners, and fresh produce from our family garden counts among the fondest memories and greatest comforts of my childhood.

From late spring when the red clay of the Carolina hills was turned over for new planting until the frost nipped the last of the tomatoes and sweetened the fall greens, our gardens were both a place of deep comfort and a source for even deeper comforts at the table.

Of all the things that came from them, the one that resonates with the best of those childhood memories and characterized our summer table is yellow crookneck squash. They were harvested while still small and sweet, when their flavor was at its peak. But that also kept the vines producing all summer long.

We never tired of them, though: There were too many different ways of preparing them, from simply steamed, sautéed with onions, creamed, breaded and fried, mashed and baked in a casserole, and as one of a dozen elements of vegetable soup, the Southern version of minestrone.

But of all those ways of having them, the loveliest and to this day most comforting of all was when the larger ones were steamed, hollowed out, stuffed with a savory filling, and baked to mellow perfection.

The filling could and did vary, from a simple blend of the squash pulp, onions, and soft crumbs to more complex mélanges heady with herbs and laced with bacon, crumbled sausage, or chopped leftover beef, ham, or chicken.

When I am homesick in the summer—and right now, being unable to go up and visit with my parents, I am very homesick—nothing soothes that ache quite so well as making a batch of these.

This is one of the things I do in the kitchen without really thinking, since, by the time I had my own kitchen, I'd helped my mother and grandmother stuff summer squash dozens of times. My job was to crumble the bread and mix the stuffing, always with one of them keeping a watchful eye. Doing that to this day makes me feel almost as if Mama and Ma-Ma are right beside me in the kitchen.

You'll want medium-sized, fat yellow crookneck squash that are as fresh as possible. They should have clear, glossy-smooth skins and stems that are plump and bright green. If, however, they're not quite as fresh as you'd like, bacon really brings out their sweetness. But then, there are few things in this life that bacon won't make better.

The recipe serves two, which is the amount I most often make, but it doubles easily if you have more in your household than I do in mine. Double the amount of everything but the bacon, increasing it to just 3 strips.

Pinch each of dried sage and thyme

1. Scrub the squash gently under cold running water. Prepare a pot with a steamer insert and about 1 inch of water (which should not touch the insert). Bring the water to a boil over high heat, add the squash to the insert, and adjust the heat to a steady simmer. Steam until they're barely tender, about 12-15 minutes. Rinse under cold water to stop the cooking and let cool enough to handle.

2. Position a rack in the center of the oven and preheat it to 350° F. Generously butter a small baking dish (I use an eight inch individual gratin). Lay the squash on a cutting board with their crooknecks to one side so that they lie flat. Slice off about a quarter of their tops, chop the top coarsely, and put it in a ceramic or glass bowl. With a melon baller or teaspoon, carefully scoop the pulp and seeds from the squashes, leaving their outer walls intact. Gently squeeze the excess moisture out of the pulp, chop it, and add it to the bowl. Invert the squash over a rack and let them drain for a few minutes.

3. Put the bacon in an 8-to-9-inch skillet over medium heat and sauté, stirring often, until it's browned and its fat is rendered. Tip the pan and spoon off all but two teaspoons of the fat. Add the white part of the onion and sauté until translucent but not colored. Add the green part, the chopped squash pulp, and a pinch each of sage and thyme, and stir until most of the excess moisture is evaporated. Remove the pan from the heat.

4. Crumbled in the bread, moisten as needed with cream (it should be wet but not soggy) and season to taste with salt and several grindings of pepper. Mix well.  Lightly season the insides of the squash with salt and pepper and spoon the filling evenly into them, mounding the excess up on the top. Set them in  the prepared dish and bake until hot through and golden brown, about half an hour. Let the most intense flush of heat dissipate for a few minutes before serving them.