30 November 2018: The Writing Life and Chicken and Dumplings 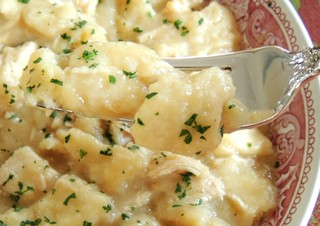 This page has been a bit quiet the last few months and I’m sorry about that. But I did promise at the beginning that it wouldn’t be filled with drivel just to keep myself in front of you all.

In the meantime, I’ve been doing a lot of thinking about what I do.

In many ways, it’s a small thing. It’s just stringing words together on a page—and not about the monumental, earth-shaking problems that are facing humankind. I don’t probe the depths of the human intellect or heart, nor contemplate the vast mysteries of the universe. I don’t attack injustice, blind hatred, suffering, or destructive greed.

All I do is write about how to cook and do it well. It’s never about being clever or inventive, and rarely tries to shake anyone up. It’s about ordinary stuff. And comfort.

So is my fiction, which is still as yet unpublished both because my confidence in it is lagging and because I am a world class procrastinator. The stories I tell don’t explore human suffering, battle injustice, or crusade for a better world around us. They’re just gentle tales about everyday human experiences—in many ways, not much different from my recipes that celebrate the ordinary, everyday food we share.

Instead of writing about being inventive and clever, my work is often about rediscovering and preserving the cookery of our past. That’s partly because I believe it’s important for us to understand where we’ve come from. But another part of it is that I believe the food from our past is all too often misunderstood and underappreciated, even (and sometimes especially) by the very people who claim to love it.

But in all that thinking, inevitably the random comments of readers came to mind, and it began to occur to me that perhaps it isn’t a small thing after all. It may not look like much: an essay on mastering biscuits the way your grandmother made them, a beef stew that has warmed my own family for at least three generations, or a recipe from one of the matriarchs who preserved the Southern cooking of their era in printed form. But in those simple recipes and in the gentle, comfortable stories of my fiction is a deep belief in the power of love.

As autumn wanes and winter is ushered in by the whirl of December holidays, my own palate and heart tend to look back more than at any other time of the year, and I want to share again the warmth and comfort of familiar flavors, textures, and smells. You might think there’s just so much to be said of the same comforting food that fills our tables in the cold season. But there’s never enough said about real love and the hunger for it that governs so much of our lives.

One can say “I love you” and merely smile at the object of that declaration. Or one can make a batch of chicken and dumplings like that person’s grandmother’s and put it before them without saying a single word.

They both send the same message, but I believe that I know which is more likely to stick.

The dumplings here are the broad, flat kind that are sometimes called “slipperies.” They’re basically a rich biscuit dough rolled thin and cut into wide noodles. Because they contain leavening, they puff up when cooked but are still mostly flat. Mine are so delicate that they tend to fall apart. I’ve never quite mastered my grandmother’s hand with them.

You can dress them up with herbs as suggested here or leave them plain. Their secret is a rich, homemade broth and a light handling of the dough.

1. Disjoint and cut up the chicken as you would for frying. Put it into an 8-quart heavy-bottomed stock pot. Add the water, the two sliced onions, carrot, celery, parsley, sage, thyme, bay leaves, peppercorns, ginger, and a tablespoon of salt. Bring it slowly to a simmer over medium heat, then lower the heat to a steady, gentle simmer, and cook until the chicken is fork tender, about 2 hours for a mature hen, at least 1 hour for a young chicken. Turn off the heat, let it cool a bit, and carefully remove the chicken. Let the broth settle and skim off the excess fat. When the chicken is cooled, skin, bone and cut it into chunks or roughly shred it.

2. Meanwhile, return the broth to medium heat, bring it back to a simmer, and let it cook at a lively simmer, uncovered, until it is reduced by ¼. Strain it, discarding the solids, and set it aside.

3. Wipe out the pot and add the fat and chopped onion. Sauté over medium-high heat until the onion is translucent and just beginning to color, about 4 minutes. Slowly add the broth and season with salt and pepper to taste. Adjust the heat to a low simmer while you make the dumplings.

4. Sift together the flour, soda, baking powder, and salt into a mixing bowl. Cut in the butter or lard with a pastry blender (or two knives) until the flour resembles coarse corn meal. Make a well in the center of the flour and pour in the buttermilk or yogurt. Using a wooden spoon and as few strokes as possible, quickly stir the ingredients together.

5. Lightly flour a smooth wood or plastic laminate work surface and turn the dough out onto it. Flour your hands and gently push the dough away from you to flatten it. Fold it in half, gently press flat, and give it a quarter turn. Repeat this until the dough is just smooth, about between 4-to-6 folds. Dust the work surface and the dough with more flour and roll it out 1/8-inch thick. Quickly cut into 1-inch wide, 2-inch long strips.

6. Add the herbs to the broth if you’re using them and drop in the dumplings a few at a time. Simmer about 5 minutes. Add the chicken and simmer about 2 minutes longer, or until the dumplings are tender. Ladle it onto a deep platter or individual soup plates, sprinkle with parsley, and serve at once.

The recipe is adapted from Classical Southern Cooking, copyright © 1995 and 2007 by Damon Lee Fowler, all rights reserved.

I love your recipes and stories. They remind me of my Grammer, and that's the highest compliment. <3
Keep on doin' you.

Your blog and books are more influential than you know, especially to me, someone who was raised on canned, boxed, and frozen foods (TV dinners were served often, for example). I appreciate your recipes, and I envy you your cooking memories. I don't comment often, but I enjoy your writing very much. If I knew how to make your procrastination vanish, I would do so because I would purely love to read your novel! I read somewhere that anxiety and depression seem to be running high, so think how lovely it would be to escape, for a little while, into a novel written by a man who knows how to write well, and who knows how to serve comfort along with his wonderful recipes.
Best wishes, and here's hoping that 2019 will be your year to publish!

My dear, you have made, not my day, but my whole year! Thank you so much for all your kind words!