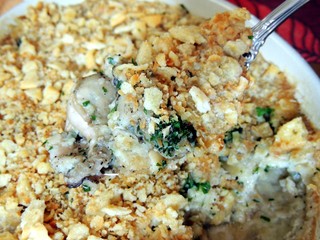 Since fall is my favorite season for cooking, it shouldn’t take a mathematical genius to figure out that Thanksgiving is my favorite cook’s holiday. Normally, the second week in November would find me up to my elbows in planning—gathering recipes, happily mapping out every detail, stocking up on the basics.

And by the week of the feast, my kitchen is fragrant with a simmering broth pot, bubbling cranberry conserve, baking cheese straws, and toasting pecans. For the space of that week, no kitchen job—not even peeling brussels sprouts—seems tedious.

This year, however, my kitchen will be a lot quieter, not to mention less fragrant. We won’t be gathering at our own table: My father will mark his ninetieth birthday on Thanksgiving day, and we’re traveling to upstate Carolina to share the holiday feast with my parents. My mother and I will be cooking together, and while I’ve written nine cookbooks, it’s still her kitchen: We’ll be doing things her way.

I don’t mind. I’m grateful that she’s still around to cook with. But having been on my own with this meal pretty much since I left home nearly forty years, doing it someone else’s way is going to take some adjusting.

There’s just one thing that’ll still have to be my way: scalloped oysters. We never had those growing up, and so far as I can remember, my mother has never made them. But over those four decades that I’ve been cooking Thanksgiving by myself, they’ve been a fixture on my table, and it just wouldn’t be the same without them.

This does have a family connection: it comes from the family that I married into. It’s old school, deeply traditional, and, best of all, quick and easy. It can be served as a first course, but since my father doesn’t like his food, as he would put it, dribbled at him, it’ll be served as a side dish right along with the turkey and dressing.

1. Position a rack in the center of the oven and preheat it to 350° F. Drain the oysters, reserving half a cup of their liquor. Pick through the oysters for bits of shell.

2. Roughly break the crackers into very coarse crumbs. Melt the butter over medium heat in pan large enough to hold cracker crumbs. Add the crumbs and toss until they’ve evenly absorbed the butter and are toasty, about 2 minutes.

3. Lightly butter a 9-inch square baking dish or 10-12-inch oval gratin dish. Sprinkle a fourth of the crumbs over the bottom. Spread half the oysters over the crumbs, season lightly with salt and pepper and sprinkle with 2 tablespoons of the parsley and a third of the remaining cracker crumbs. Spread the rest of the oysters over the top, lightly season with more salt and pepper, and sprinkle with the remaining 2 tablespoons of parsley and half the remaining crumbs.

3. Whisk together the eggs, cream, and reserved oyster liquor. Season to taste with a few dashes each of Worcestershire and hot sauce and whisk to combine. Pour it evenly over the oysters. Top with the remaining crumbs and bake until lightly browned and set, about 30 minutes.

Scalloped Oysters bring back many bygone memories. Each fall our volunteer fire department auxiliary would hold a country ham dinner with one of the main side dishes being scalloped oysters. These weren't just any scalloped oysters but were Aunt Lizzy's scalloped oysters. She was very meticulous about how the ingredients were put together--she layered the crackers and oysters--and was sure to only use light cream. No one else made the scalloped oysters, just Aunt Lizzy. Those were good times.
Thank you for sharing what appears to be a delicious recipe. I'm going out for oysters and crackers soon.

Thank you so much for reading and for sharing your wonderful memory, Steven! I think your aunt's scalloped oysters were probably very similar to the one that I published this morning in the Savannah Morning News. It came from friend and colleague Mary-James Lawrence. If you're on Facebook, look for my author's page. That's where I share the link to the story.

Scalloped oysters is something my mother always made for Thanksgiving and Christmas. There were never any leftovers. Our recipe never included eggs but it's something I think I'll try. As a child i would get to help. Great memories.

Thank you so much for reading and sharing! Wishing you a lovely and delicious holiday!